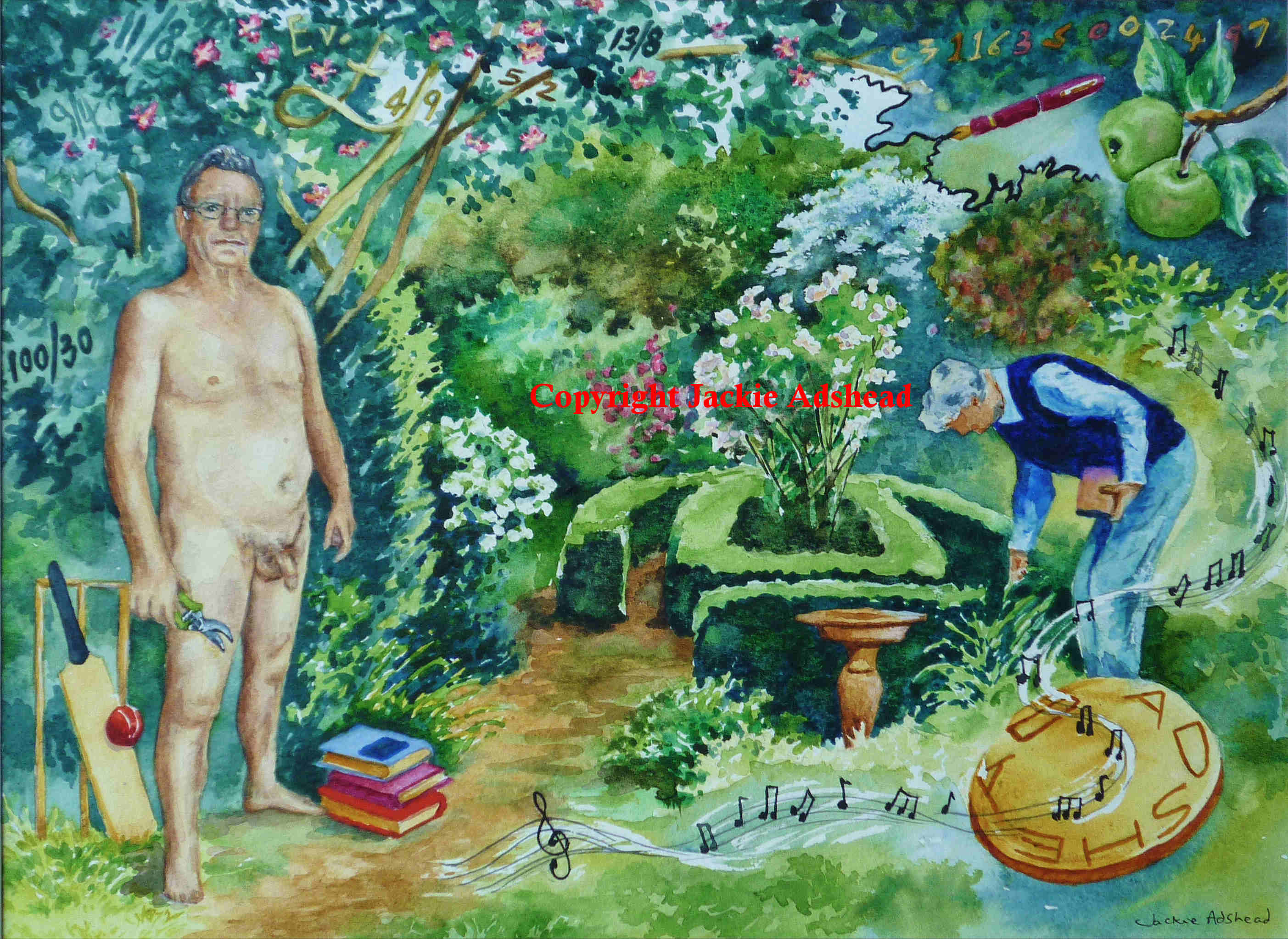 Unveiling Stuart in all his glory

Â Here it is then, in all its technicolour glory!

Stuart’s pride and joy, and mine as well.

As I explained in the last blog post its been a complex image to create, to bring all the aspects that we had agreed would be in the picture together, for them to interact and be of equal import. A naked Stuart, of course being the main focal point, standing there quite naturally in the nude as if it was something he did on a regular basis, and he and I know that he does not. So, I’m pleased at how natural he looks, and I know that is in part because he’s relaxed around me as I’m so used to drawing people in the nude and he’s fully aware of that and I don’t act any differently with him whether he’s nude or fully dressed, and that ensures he feels comfortable in either state, too. I wanted the expression on his face to look quite neutral. Neither smiling (which would look certainly look more Â like *smirking in a self satisfied sort of way* when he’s naked) or looking serious (so why’she got that grim look on his face when he’s standing there in the nude isn’t he enjoying it?), no, pleasantlyneutral it had to be, to make the picture work. The rest of the picture is built around him – the English country garden setting with birdbath and box hedging Â is on the whole the one he and his wife created 25 years ago, mostly from scratch, and filled with glorious scented roses and climbing clematis, vibrant camellias and vermillion fuchsias. So, it was important for me to put in some of those, to show his love of gardening, along with the secateurs (a sigh of relief from all involved when you realise the secateurs are innocent garden implements and not meant for any malicious intent other thanÂ towards deadheading a few roses!). His wife, who is depicted working in the garden, a book in her hand indicating thatÂ she is as knowledgeable as he is on their love of gardening, and Stuart too has knowledge at his feet in the form of the books. The cricket stumps, bat and airborne ball show his love for the game (well, someone’s got to like it! 🙂 ) as well as the musical notes dancing along through the air, showing his love for classical music.Â  The two apples represent the greengrocers shop that he and his wife ran for three years as well as being his favourite fruit.Â  The formal writing penÂ with its dual black lines of flowingÂ ink depicts the fact he is a prolificÂ writer and has been published in various local publications. There is also a line of numbers illustrating partly his mathematical brain but also the fact he has worked in clerical jobs – the slight joke showing that the numbers are following on from the branch of the tree above him – a visual pun on “branch of mathematics” ! Also, there are bookmaking odds for the time he spent working for a bookmaker, and of course there are seven of those, as seven is deemed to be lucky for some (usually the bookie, and not the poor punter!). Also within the tree branch is a pound sign Â£ showing that he has worked directly with money for most of his life – particularly in the bookmaking business taking and placing large bets, and for when he did payroll in other office work. Ah yes, and the large round disc in the foreground, with the circular legend ADSHEAD on it relates to the bookmakers name he started work with after leaving grammar school, and had fifteen good long years working for before changing career, and also, my name, the sameÂ surname Adshead but no relation whatsoever, because I also have had an impact on Stuart, opening up a new facet to his character later on in life, and giving him new found freedoms to display himself via the artwork I’ve done of him. But art does that, and I know that it can be a wonderfully upliftingÂ therapy for those who discover the delights of posingÂ for it. So the circle of ADSHEAD relates to two large influences on his life, at different times of his life, but equally of strong importance. And incase you’re thinking I’m being big-headed to put my name in it in such a presumptuous manner, it was something he asked for, not something I decided on.

The painting is done in watercolours, that most unforgiving of mediums, that leaves very little room for error (and then only for those who know the tricks of adjusting those little errors if need beÂ so that they aren’t obvious to the viewer). I know that the only way to ensure that there is little room for error is to get the drawing spot on to start with, which is why the drawing and layoutÂ tookÂ four hours for this painting alone. After that I had to ensure that I got the lights in the right place in the picture, so I used masking fluid to that effect, for the lightest parts of the picture, and particular the flower heads, the musicalÂ ribbonÂ flowing over the circle of Adshead, the apples, and pen, the numbers, bookmakers betting odds, books, cricket bat and stumps, his wife, the sun dial and some of the foliage, leaving the restÂ  for the paint to flow over and around, filling the spaces as the painting filled up. I painted Stuart first to make sure I got the most important part done, and all the tones correct to show his body shape and form. Thenon to the rest – I only had a vague idea of the colours of some of the parts of the painting, particularly the garden, the pretty pink rose like a bower above Stuarts head, the box hedging, and background to the garden. I knew they would all be green, but found variations within those verdant shades using veridian, green gold, sap green, and adding French ultramarine and Payne’s grey for the darkest greens. I usually paint all the background in one go, but didn’t with this painting, as it developed and the colours came to me, I wanted pale cerulean blue for the sky through the dark green leaves, and soft light green gold Â for the grass at Stuarts feet, always keeping an eye to the balance of the painting, the maroon of the pen echoing the maroon in one of the books at his feet, the blue of his wife’s shirt and top echoing another of the books, and red for the third uppermost book, along with the red of the cricket ball ensuring the eye went there contrasting against the full greens of the rest of the painting, making the vibrant contrast and calling the eye to look closer. And also aware that within the drawing, the line of the branches bring the eye back to Stuart, the musical ribbon is flowing away from him but also flowing around to him, his wife’s body is bending towards him, the pen, and cricket bat are angled towards him,Â  and the secateurs are pointing at the books, indicating his love of gardening amongst many other things. As they all were painted in, the areas of paper that were left were slowly filled in, creating a harmony within the work, and pulling all the aspects of it together as a visual whole, with movement within as the eye flows around the picture, and takes in the items within it, some hidden, some less so.

When I took the picture to Stuart, he had no idea what it would look like. Although it was exactly the same layout as the briefÂ thumbnail sketch I’d shown him a few weeks ago when he discussed it, it was difficult for him (or anyone else for that matter!) to know what was in my head and how it would all turn out, and pull together. “Lets see it then” he said indicating the package I’d carried in after we’d exchanged pleasantries. I unwrapped it, so that he could see it, he stood back to drink it in, and I sat back and let him have a quiet few minutes to view it, then gently explained all the items in the picture, picking them out one by one, to show what they were andÂ how they were included. He nodded, we’d hadÂ some long and involved conversations about this before over a two visits to his house. He told me how pleased he was with it, then came over to hug me, he was soÂ happy with it, and we sat contemplating it, both of us pleased with the piece of art we had created between us, artist and client. He knew it was through my listening to him and what he wanted that I had created the picture he wanted, this celebration of his life, his loves, his passions, and lively character. I explained that I’d called it “Stuart Haywood baring all at 75” as not only was he baring his body, he was baring a large part of his past lifeÂ as well.

Â I sat and chatted with him and his wife, partaking ofÂ  hot tea andÂ crisp ginger biscuits, our eyes kept returning to the painting, and whilst thereÂ I helped him hang it as he was keen to have it on the wall to view it better. We both stood back to admire it, Â both of us loving where he had placed it near the window. And again, when it was time to go, he walked me to my car and said again how much he loved the picture.

And yesterday he rang just toÂ inform me that it was *Magnificent!*.

And today he rang to tell me he was *Joyful!* over it. Aw, I’m soooooo pleased. Pleased that he’s happy, because a happy client makes me happy. Pleased that I did exactly as he asked for me in this very personalised, bespoke, designed specificallyÂ for him byÂ me painting. Pleased because I’d gone to all the trouble I had to get itÂ right for him. PleasedÂ at the work andÂ skill that had gone into it.Â And pleased that I had done a good job.Â

He’d asked for a painting I was proud of,Â and that is what he got. Â

Â When he rang today, during the “magnificent conversation”, he mentioned in passing that he loved the way he could view the garden that was so special to him via the painting, and liked the bright colours of it, and I chuckled, and said that it was because I knew he likes bright colours, because heÂ is ebullient, and full of life, the painting should convey his colourful personality. I could have easilyÂ toned it down but he’s not a muted sort of person, he’s bright, cheerful and colourful, so the painting should be too! It is an extension of him, of his life, of his life force.Â Â

We both love it.

But, what do you think of it?