Whats in a title?

I visited one of my favourite galleries yesterday, always a joy, and lovely to see their latest batch of paintings. Some I really liked, some were mediocre, a lot of them were tastefully arranged young women with only the hint of nipple on show – any bums, crotches and full breasts were covered artistically (and disappointingly) with a cloth (unlike my drawings!). But what I was struck by was the naff titles of the paintings – they were something along the line of “garden”, “beach at sunset”, “picking flowers”. And didn’t, for me, involve any emotion in the painting, as they were actually of a beautiful girl, or a couple of pretty girls, within the garden or beach setting – so, if they had been something along the lines of – “Julia in the garden”, then I’d have instantly had an affinity with “Julia”, or if they had been less personalised but perhaps invoking an emotion – like “picking flowers for mum” or “Sunset thoughts of my lover” then I’d have been happier with the painting. But, I suppose for a lot of people, once they’ve bought a painting and hung it on the wall, what does it matter what the painting is called?

I can agonise for days over the title of a painting, sometimes taking longer to think of it than it actually took to paint it! And on the whole I like my titles (I’m not saying they’re the best in the world, because they’re not, but hopefully they convey something into the painting through them). Although the fanny paintings that I’m currently working on will be called something along the lines of “fanny 1”, “fanny 2”, “fanny 3” etc that is ONLY to protect the identity of the person behind the painting, and not because of any inability to think of a title on my part.

I have painted lots of watercolour paintings of tigers. I love tigers. I love their bright dramatic colouring, their stripes, their menace, and the whole cat thing about them. So the first tiger painting I did was quite naturally called “Burning Bright”. The next one I did was called “Tiger bright” then followed “Spitting mad” since the tiger was all teeth and fury. After that followed “The tiger with 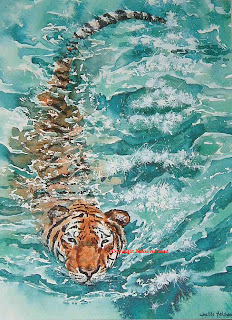 in” since the tiger looked like it was looking though a wall of water at the viewer. Then came “Cool regard” as the tiger was looking quietly at the viewer, and then came the jokey one which I called “Tiger spotted” since there were two tigers in the painting, one all regal and majestic in the foreground, and the other was approaching from a distance, having spotted him, and it amused me to call it that, as tigers aren’t spotted, they’re striped (as well you know). So, all tiger paintings, all with titles I was happy with. Then came the painting I did of a tiger swimming. I was really pleased with the painting, it had gone beautifully, looked good, and was technically well done, showing the body of the tiger submerged beneath the green waters. But what to call it? I went though all the titles I could think of ……. tiger swimming, tiger in water, water tiger, swimming tiger…… none of them worked………. so in the end I called it “Sea for cat” being a pun on the phrase “C for cat” and it amused me to call it that. But I had chickened out of the title I SHOULD have gone for………..it was so obvious, so deliciously apt, so totally RIGHT, and yet I didn’t use it!! So, now you’re wondering what it is, what I should have called this painting of a swimming tiger?