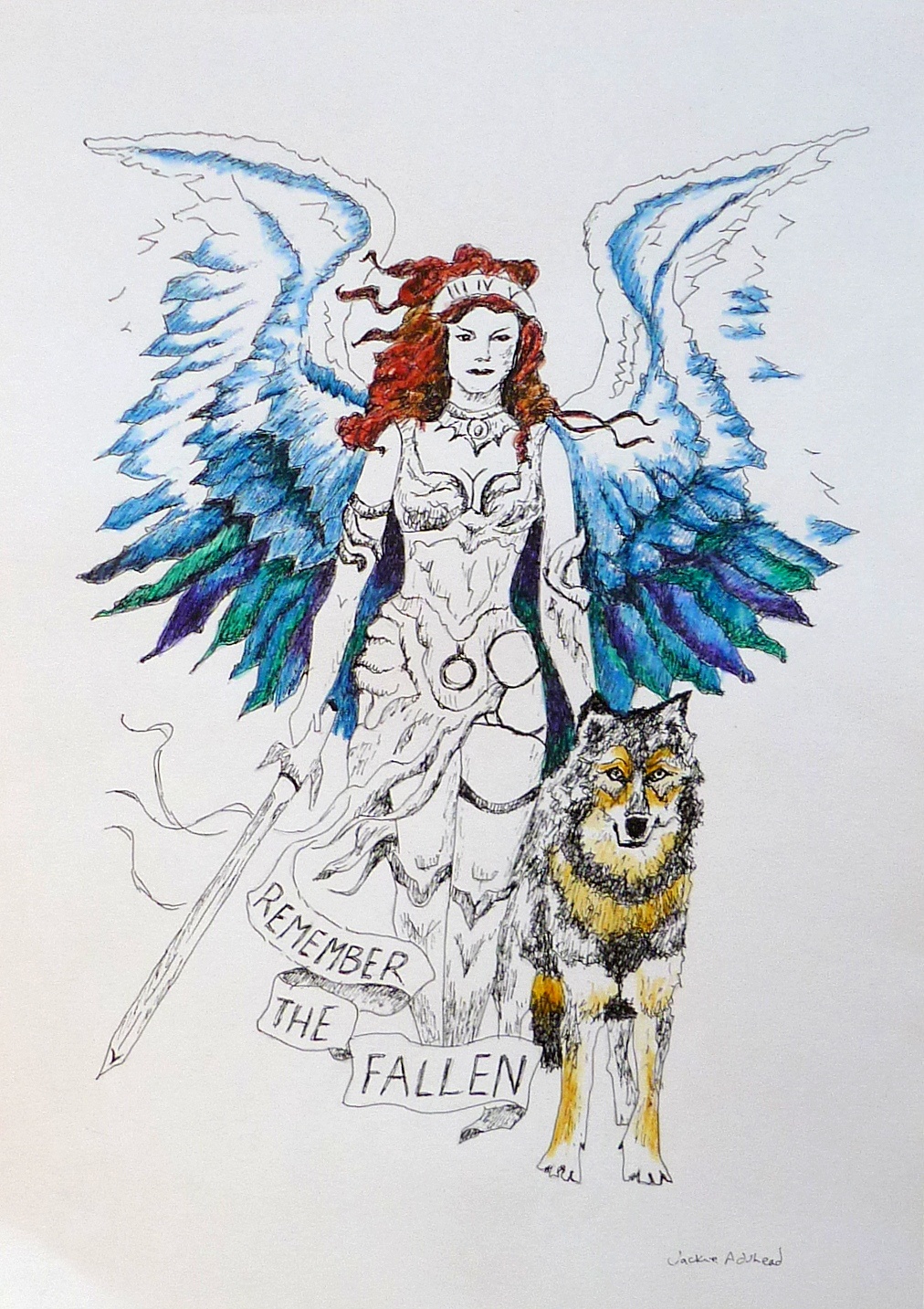 The most challenging piece of artwork I have ever done

When I was finally able to get working on the commission of the picture for the young woman (in her mid 20’s) that I was first asked to do in May this year, I knew I needed to throw some ideas together and think deeply about them and think so more.

She had first mentioned it to me in May, but I was moving house a couple of weeks after that, then I was going on holiday to France, and after a five week gap of frantically doing jobs in the new house was returning to France again in August for the second holiday of the year. It was going to be towards the end of September before I could get around to it and think, and plan.

I looked at my notes again and the images she had sent to me to “put all together” as she so easily described it, but was actually very difficult to do. This was never going to be a simple drawing. Plus she wanted the original artwork to be a tattoo design so I had to bear that in mind as it meant every single line had to count. No mistakes, no indistinct pa

rts, all clear and tightly drawn.

I was basically taking the first image of the guardian angel, with the wings, and making her look more sexy, changing the face she had for a softer one, adding a “time” crown, adding the words “Remember the fallen” as a reminder of  people loved and lost, changing another image of a lion at the sidede of her to a wolf and then giving the wolf the same colouring as her beloved dog, adding red hair from another face, adding the wings to be the colour of magpies. The whole thing as a black and white image with colour splash of the red hair, magpie and the wolf colouring. So not only did I have to get the line drawing right, I had to get the tones right, and I had to get the colouring right. In its favour was the fact she wanted the image on an A4 piece of paper so it wasn’t huge, but it all had to be planned, very carefully!!

First I had to plan the composition, in pencil on paper as that enabled me to rub things out, add, and fine tune. When I was happy that it all worked as a concept  I drew it out as a simple line drawing to get the basic lines. Then I made two photo copies of it, the first one I coloured in with pencil to make my tonal picture, highlighting the lights and darks, giving it form. The second copy I coloured in using felt tips just for the colours of the red hair, the bluey-greeny-purply shade of the magpie wongs, and the ochre and grey and black colours of the wolf. Since it wasn’t required of me to put any more colours in I didn’t need to worry about the rest of it.

It probably took about 20 hours to get to that point, over a week or so as there was so much to consider and think about ovenight! I could then start to draw out the image properly, which I did on cartridge paper. I drew it out in pencil, for the line drawing, then rotring pen for the outline, then I filled that in with the tones, and when that was done I did the coloured parts with ink. Of course by then I was following my line drawing, and tonal drawing, and coloured drawings then, as I had done the difficult thinking and planning parts in my working drawings.

Picture finished and even though the client had paid me for it and was collecting it from me a week later she sent me a message asking me to send her over the image via Messenger. I told her, with a smile, “No. you are going to have to wait, the photo won’t do it justice, and I want to see your face when you view it!”. She told me later on she fully expected me to say that she would have to wait. But she understood the reason for it!

It was Sunday morning when she saw it. And I watched her face as she viewed it. Her face lit up and mine did too. She looked and looked at it, and I pointed out that it had “movement” in it with the way her hair was flowing, and the way the skirt of her outfit flowed by the side of her and the way the angels wings were opening up, not fully out, and not closed, in the process of opening..it made it more powerful than it being static. She nodded and agreed, and then started to tell me the significance of the magpie wings, I had presumed it was just the colours she liked. But she told me that she used to find magpies menacing, but of more recent times whenever she sees a magpie it has brought change with it, good changes.

This picture “Warrior girl with wolf” is the essence of her and all that she stands for. It is the embodiment of her. She loves it. I love it. Its been a challenge, the biggest one I have had in any artwork I have done for anyone. But what I was delighted to hear was that she knew I was the only artist she could trust with the commission. She’s now planning her next one, and I can’t wait to see what it will be!!!