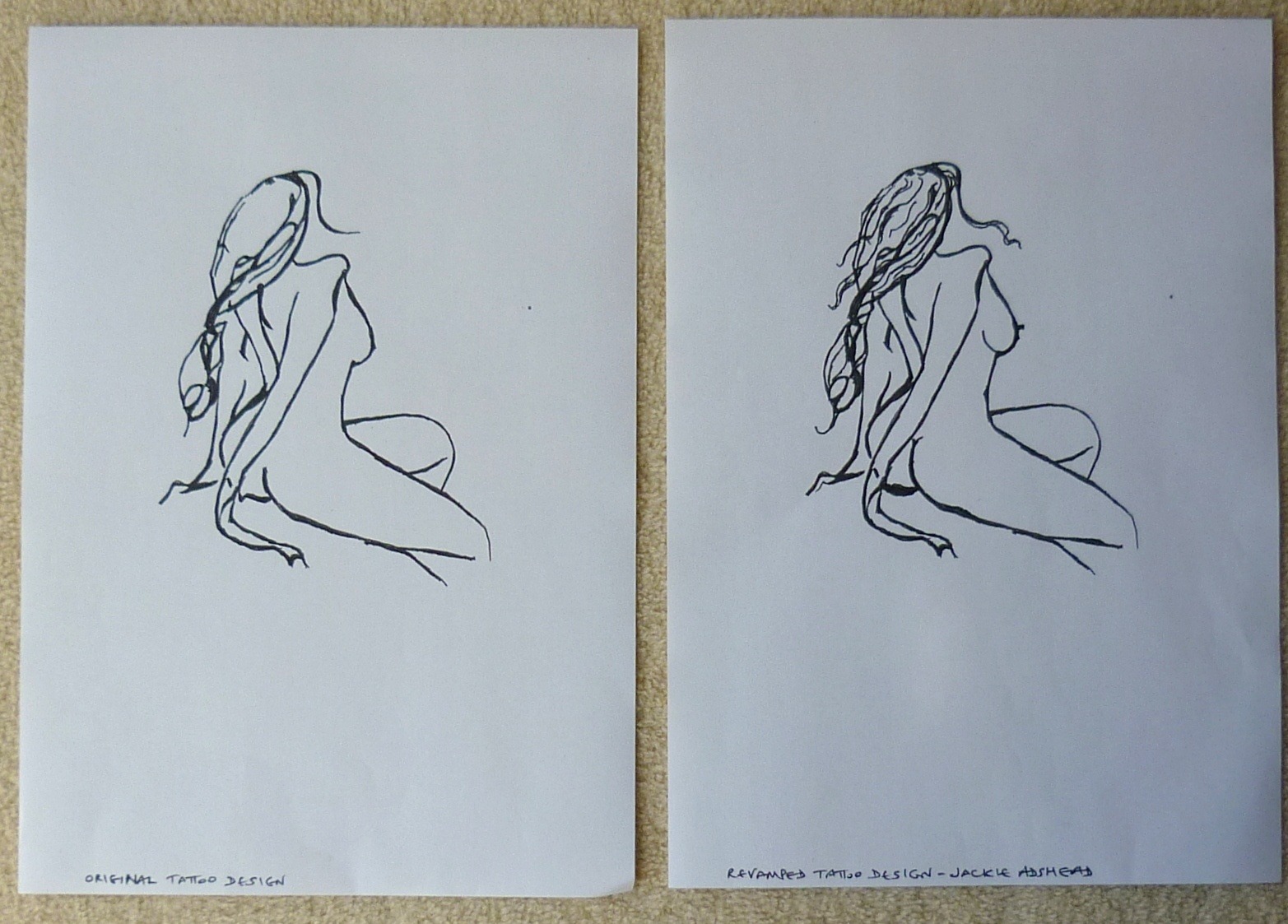 I have been asked over the years to do some very interesting commissions for various clients, but one of the most difficult ones was asked of me recently. A friend of mine who I have done artwork for before showed me a tattoo design that her friend had, but didn’t like the artwork so much now and wasn’t sure how to change it, or whether to just have a big tattoo over the top of it of something else.

My friend showed me a photo of the tattoo and I instantly loved it, I could see what it was and liked the simplicity of it, but the owner of the tattoo didn’t like it and wanted it to be more feminine, and sexy.

The design is here, its of a naked woman, and I could see that it was, but how to change it…how to improve on the picture? You see I hadn’t drawn it originally, and if I had I would have done it differently…

I drew out the design onto a piece of paper in pencil, which gave me the lee way of rubbing things out if they didn’t work. I didn’t like the way that parts of the body could be seen through other parts of the body which was misleading… I knew the owner of the tattoo felt that the woman was bald as the hair wasn’t flowing over her head, and even though her right hand looked like a flipper in a way there was no way I could add fingers to it without it adding to the awkwardness of the design and exaggerating the problem hand, so I felt that I had to ignore that problem area and just put more interest in the parts that could be improved on to take the viewers attention in that way. Obviously making her bum more sexy and curvaceous helped, and adding curves to the boob to make it a proper boob and a good pert nipple on it, also made her more sexy. I also added tiny details here and there, in the hair, in the curls of the hair, that made her more feminine. When I was happy that all of that looked good as a concept then I could draw her out in pen.

I did about three versions again and again until I felt that I couldn’t improve on it anymore. The client paid me for the work on behalf of her friend, who didn’t know anything about it…..

And then I sent her the picture…..

And she instantly sent me the response back to show me how pleased she was!!! Yay!

Except, it wasn’t her response, it was the woman who had the tattoo who had no idea of the work being done, so it was a massive surprise to her!

And as I had the text conversation with my friend, she told me what I had known anyway, that the artwork would have been so much better if I had done it from scratch. And that is why she is asking me direct to do her next tattoo design!! She knows she will get a better piece of artwork!!