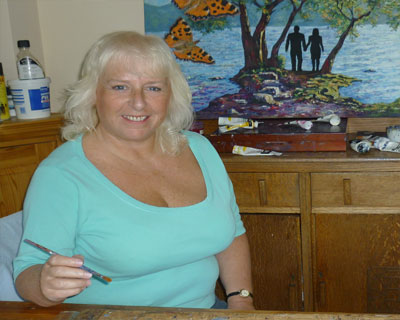 It’s been such a massive year of change for me since my fella and I have been able to plan our future properly together now. He’s had an awful lot of things to sort out this year and I’ve helped as much as I could do with the paperwork, and physical work that has been needed to be done. Of course that has meant that any painting I have wanted to do has been put on hold too. I’ve hardly painted anything this year and am missing it desperately.

We’ve also been able to catch up on the holidays this year that we’ve not had for a long time too. And went to France twice this year, in June, and also in September.

And when we got back from France in mid September, we had a wedding to arrange, we knew we only wanted a small wedding of a few close friends and immediate family (since we had both been married before) and were married in mid November about six weeks after we made the first plans and arrangements for it. It was a lovely wedding, in a lovely hotel in Kent, just exactly what we wanted, and great fun.

Our honeymoon was only a short one too, in Cornwall, but was exactly what we wanted, even in a windswept and grey November staying in a lovely hotel overlooking a fabulous beach near the Roseland Peninsular.

Since then I have spent a couple of weeks ringing and writing to various organisations regarding my official name change, and that always takes longer than you expect.

And now we are in the run up to Christmas, and I haven’t promoted myself as being available to paint pictures for clients, since I want to do that when I am fully able to commit wholeheartedly to it. There are a lot of paintings mulling around in my head, ready to come to the fore when I can create them…

And even though I am married I will carry on as “Jackie Adshead” as my professional artist name since that is the name I am known by… the name I feel as an artist!