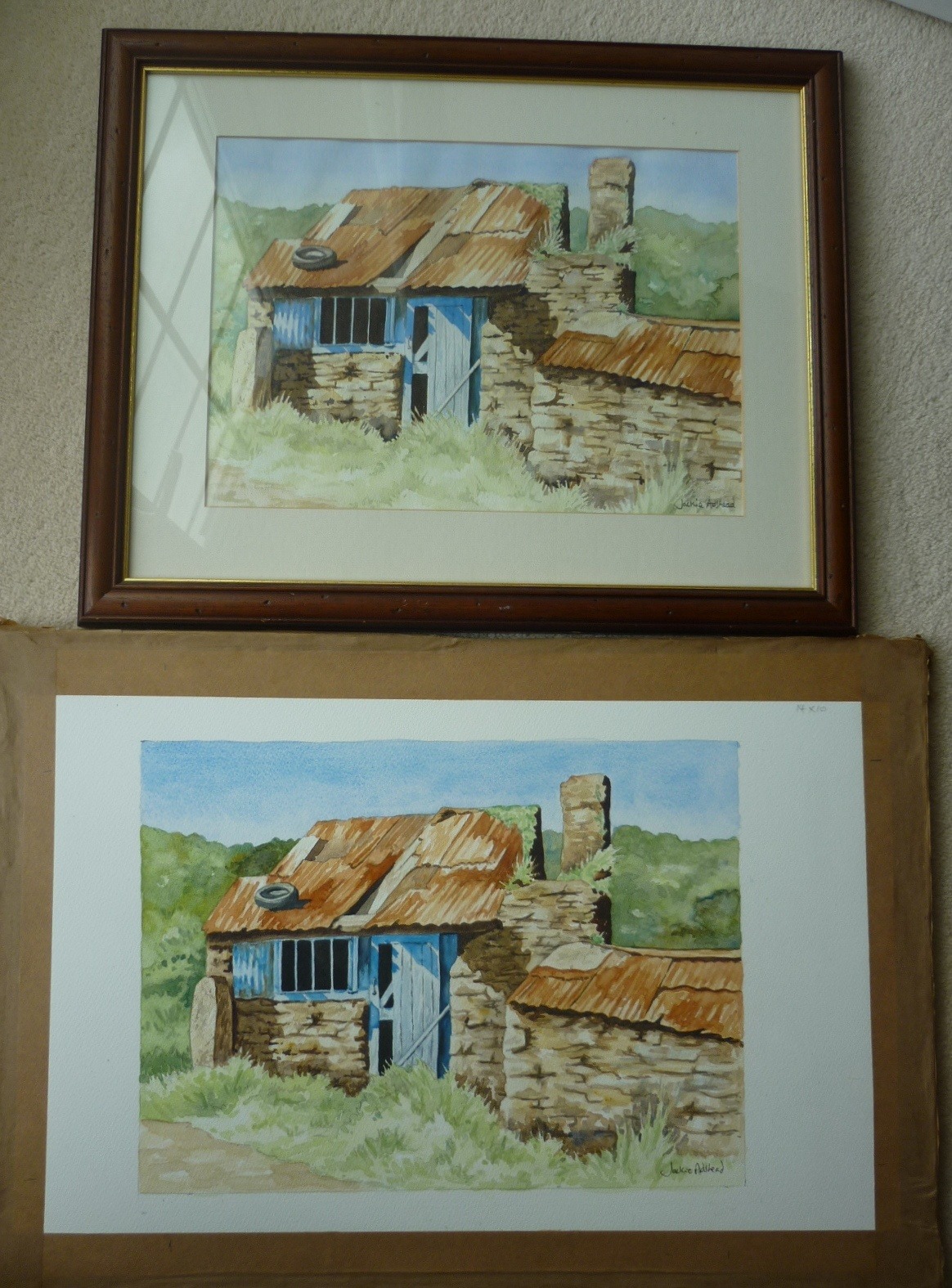 Echoes of white plus one going back in time

Of course I was delighted that the person who wanted to buy one of my “Happy Gardens” collection of paintings had chosen the one I liked the best – “Echoes of white” – its the one that I get the best feedback from and most people, and certainly me included find the most peaceful and tranquil of them, I loved painting the white themed garden, particularly the white agapanthus in the foreground.

But just after we had ageed the sale of it, the buyer also wanted to know if my watercolour “Fishermans hut, Prussia Cove” was still available for sale? I replied that the bad news was that it wasn’t as it was MY painting and I didn’t want to sell it… but the GOOD news was that I

could repaint it exactly the same for them… so that’s what I’ve been doing over the weekend….! It was like revisiting an old friend redoing that painting!! Yay! Happy days! ?

Since the buyer had decided that the original size I’d painted the first one in was fine for the second one, the easiest way to get the size exactly right was to lay a sheet of tracing paper over my painting (which was still in its frame and behind glass, but that didn’t matter at all) and trace over the important lines. When that was done I then transferred the drawing over to the watercolour paper stretched on a board that had dried overnight, and then I went over again to check over the drawing to make sure all the fine details were in place. If the drawing is right, then the painting will be right.

Stage one of repainting “Fishermans Hut, Prussia Cove” was tracing out the exact lines and redrawing them on to stretched watercolour paper.. until I was happy all the lines were correct..

Stage two of  the repainting was working out the original colours that I used years ago when I first did this painting and that actually took more than half an hour or so of me guessing which of some of the colours I’d used particularly with the pale greens as they are made up of blues and yellows, but which blues and which yellows in which quantities?  The burnt sienna of the rusted corrugated roof was obviously correct but after a bit of experimentation I found that it also had touches of raw sienna and alizarin crimson in it, and the stone walls were yellow ochre but also had touches of cobalt blue and burnt sienna and French ultramarine as well…to make sure I was happy I made a “colour plan” on a spare bit of watercolour paper and a quick splash of colour next to the part of the painting it referred to – like “roof” and the names of the paints for that part too next to them. I wouldn’t normally do that for a painting as I work out the colours as I go along after first deciding which colour palette I am aiming for, but this was a copy of an original and needed to be as close as poss

ible on the colour choices. It was more difficult to do than you would think as it was watercolours which are always more technically difficult.  So when I was happy with my choice, I painted the sky, hills, foreground grass and the first layers of colour for the roof and walls .. .

Stage three was building up the colours on the rusted corrugated roof, and the stone walls, painting the all important faded blue of the door and window, and then the deep darks of the gaps in them then just building up the colours to match as close as possible to the original .. .And I am delighted with the results of it.. the same but with its own character!

And it was just like revisiting an old friend doing it, I loved the old fishermans hut when I first saw it at Prussia Cove in Cornwall some years ago, the ancient building just sitting there in the bright sunshine, as nature and the weather had taken its toll on it, I knew I just wanted to capture all that it portrayed!

And I am delighted that the buyer who has bought these two paintings from me has chosen two of my favourites..as they wing their way across the seas I hope they bring as much happiness to the buyer as they have to me, when I painted them!