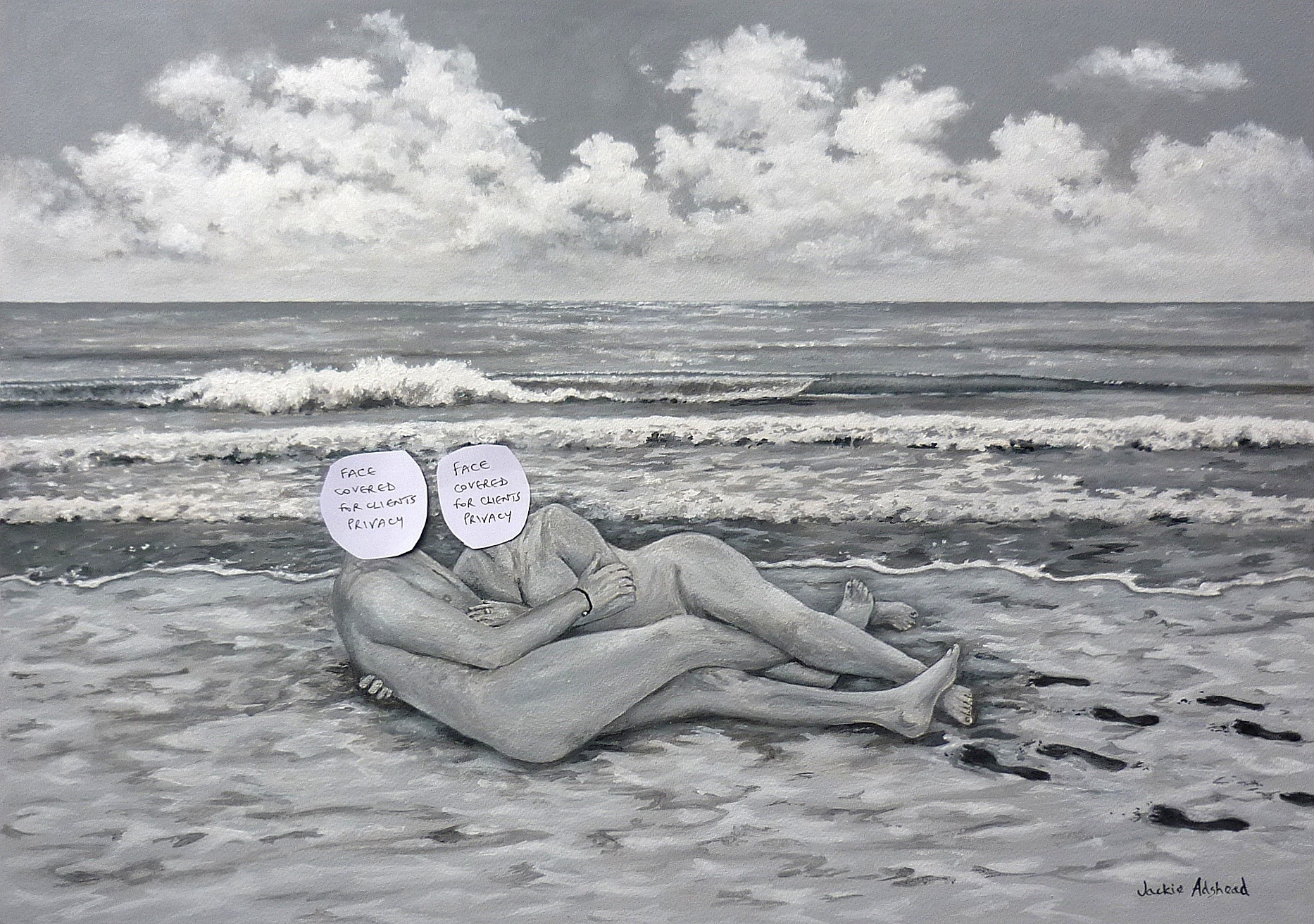 At long last after working so hard on this painting, its time to unveil it.

The request at the time of first discussing the painting with the clients was for me to work from photos I had taken, and to depict them lying on a beach, with the sea gently frothing behind them, the sky with some clouds in it, footprints in the sand leading to them, and all of it done in black and white. The sky, sea, and beach should be equally split three ways through the painting which meant I had to think of ways of making it look interesting within the painting. And even though they are naked in the painting, there is nothing on show of their bodies, its a very elegant pose I think that they have chosen.

It all sounds so simple.

Because, I had to create a sky from nothing, which…………… isn’t so difficult. And also the right sort of sea, which after a bit of searching through my photos I found the perfect one for me to use from a holiday in Turkey. The beach itself I created, and put a few undulations in the sand to show the texture within it which I really enjoyed doing. The footsteps were a bit more difficult since it had to be the right sized footprints walking with enough gap between them, but after a bit of work I was happy with the result.

And then the couple themselves, looking like they were actually there on the beach.

Because the painting was in black and white there was no room for error with the tones of the painting which I had to work around in a couple of places to make the sea behind work with the couple infront so that they didn’t blend into the background, but stood out, but the sea itself looked natural too.

It was early evening and I thought I might not hear from them until the next day. But something happened that I’ve never had before in all the paintings I have done for other people. The clients rang almost immediately, and said how delighted they were with the painting (I’ve had THAT response before of course!)  and that the balance of the money they were owing me was already in my bank account. Wow! I’ve never had such a quick response!

I could hear the delight in their voices, as they viewed it and my delight was equally as positive and upbeat as theirs in response.

As we made the arrangements for delivery I asked if they would be happy in me showing it on my blog, and the reply they gave was that they were more than happy with me showing the painting, but they wish their faces to be covered to retain their privacy. Which I have done here, at their request. The painting is 23.5 x 16.5 inches in acrylics on white watercolour paper. I have only used black and white paint in this picture, but even with the monochrome colouring I can see so many depths of tones within this painting. I’ve called the painting “Happy couple at the beach” so you know that even though you can’t see their faces, they are smiling at each other…..