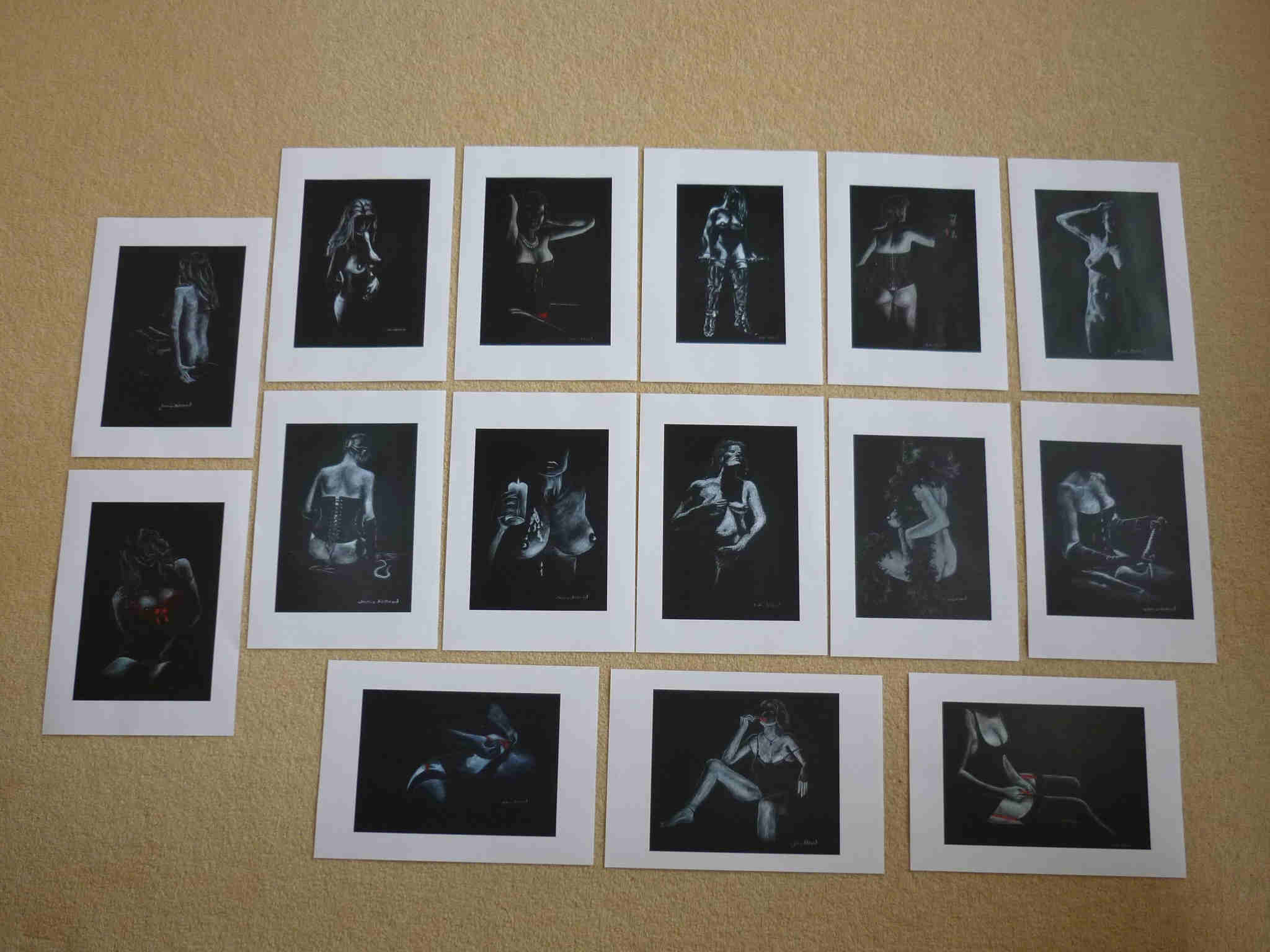 If I was to take one picture, it would be that one

The guy who bought all the black on white erotic prints from me some months ago asked me to call on him this weekend for me to see how he’d arranged them. I always love to see how people hang my pictures, what frames they choose, which room they hang them in, and what setting they will be in so I was fascinated to see the outcome of these, since he bought fifteen of them and that’s a  lot to arrange. I know he wanted them all on one wall, and when he showed me the lounge I could see where he was going to put them, on the black carpeted wall behind his black leather settee. They were going to really set off the room as well. The carpet on the one feature wall added texture and depth to the room and looked classy and elegant. The rest of the room was stylishly papered in a light grey and white wallpaper and obviously very masculine. He showed me the sleek black frames he’d chosen and how he’d arranged the pictures in groups so that they went nicely together, choosing the dominant female in her black shiny pvc boots as the centre for one of the groups, and putting the majority of the ones with hints of red together in the other frame. And I was delighted to see that he’d kept the titles of the pictures as part of the framing as well, because as I smilingly said to him “The titles are so important, explaining what is happening, and adding to the enjoyment of the image itself” and he nodded in total agreement.

As I admired my pictures and what he’d done with them be brought out others by other artists to show me, most of which I had seen before but not all of them framed, so I could see them again in their new attire ready to go on the other walls. He also brought out an ink drawing that he’d shown me before that I had admired, and I was glad he did as I remembered how much I’d liked it. Even though it was of death and desperation, it was a very poignant drawing. As I cast my eyes over it again, and held it in my hand he said quietly “Its yours, I want you to have it” and I looked up at him, and said earnestly “I can’t take that, its too special to you, you had it commissioned years ago and its part of a set”. He smiled and said “I saw your face when you first saw that picture, and could see how much you loved it, and a picture should belong to a person who values it, and you do”. I still demured as we looked at other pictures he had and he explained why he liked them, one of trees, one in a Japanese style.

And as the conversation came to an end, I stood up and he handed me the ink drawing and said he wasn’t able to wrap it up for me. I smiled and kissed his cheek and thanked him for it, and said how much I would love having it. There was no need for any more arguement, we both knew that.

And he paused and said “If I had to get out of the house in a hurry and take only one painting, it would be that one….” and nodded to the one that was in pride of place in his lounge. I looked at it, and understood. It was of his dog, the one that died a

couple of years ago, and I know that the painting was painted with love, of love, because I was the one who painted it. I did it for him.

So I understood that he wanted to give me the drawing that I love so much in understanding of art being with the people who value it the most. It was his gift to me, in understanding of my gift to him. Art is about love, of desire, of understanding. Its about being in tune between artist and art lover.

So now, when I look at the picture he has given to me as a gift, I can see that it is about death, and desperation, of war, and men fighting for what they believe in.  But, it is so exquisitely drawn, it has so much tiny detail in that small ink drawing about a battle, and I’m not even sure which battle it is – it might be the French at Waterloo, its of men who have seen fighting, and of the eleven men depicted in it, eight of them are dead, their bodies strewn around a broken canon, and the others look wearily over towards the next onslaught. The whole picture is in only black and white, but drawn in such clever artistic detail that I can’t help but be enamoured with it. I can see the anquish, but understand it for speaking to me through the simple  marks on the paper. Its art, and even though its about the horrors of war, it’s full of love.