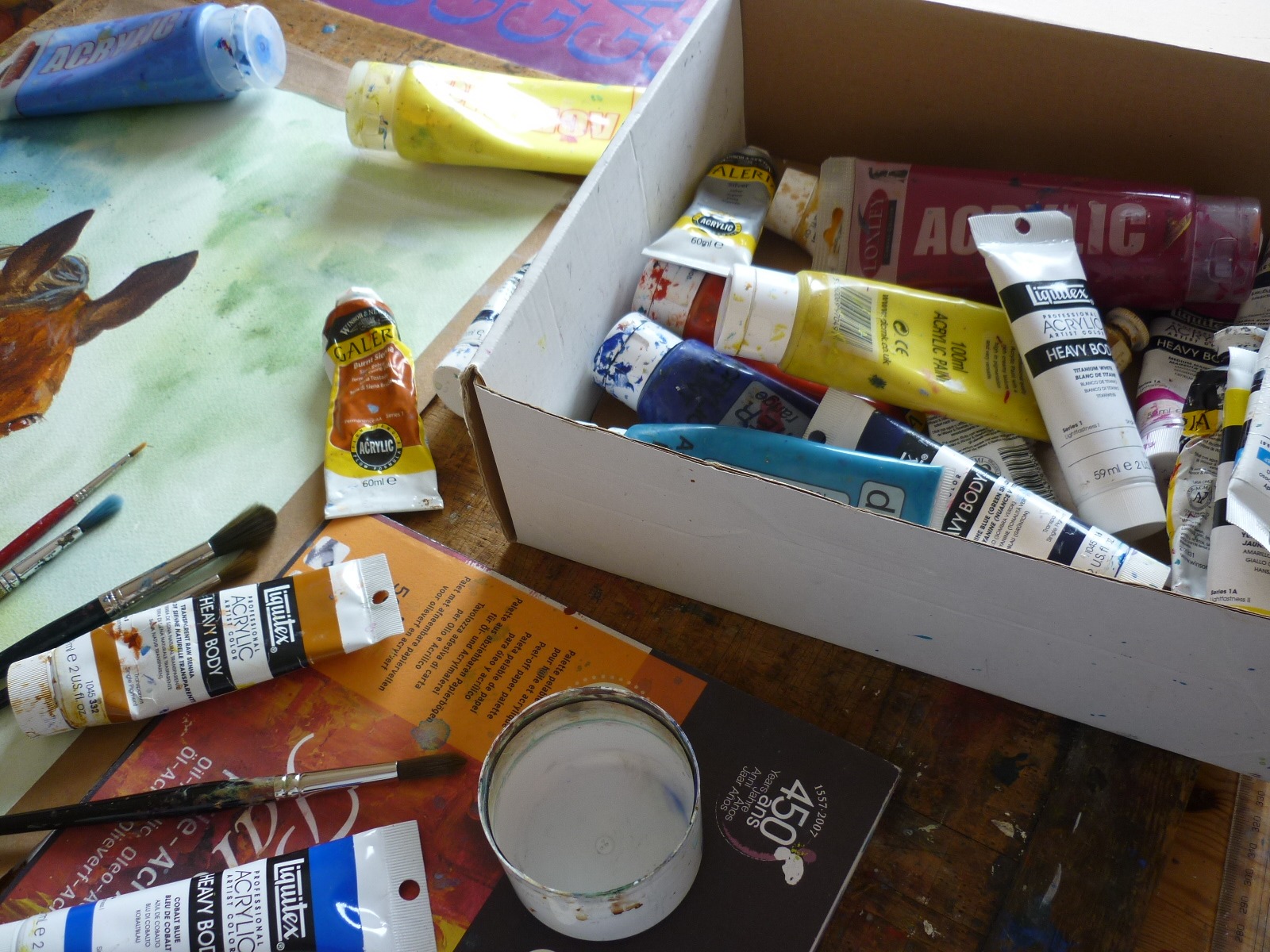 A tale of the three bears and the artist

A woman contacted me a month or so ago, having seen a local advert that I’d put up, asking if I could teach her to paint in acrylics – “Yes, no problem, of course I can” was my response. We agreed a date between us, which was yesterday, and she came along with her painting equipment, and some paintings that she had done, that she wanted my opinion on. The first thing she showed me was of a bird amongst autumn leaves, I looked at it as she said “I’m not happy with that, its not right is it?” as I replied “Its fine, but its only half done, it needs the details, darks and highlights doing, and it’ll look great!”. The next picture she showed me was of flowers and she said that she had been told that it wasn’t a watercolour. I looked back at it and said “Is it painted in watercolours, on watercolour paper?” and she affirmed that it was, so I smiled and said “Then its a watercolour!”. She said that she had been told that you shouldn’t put black in watercolours, then said “So why do they put black in watercolour boxes of paints?” and I smiled, and agreed, totally with her! I explained that if you are a true watercolourist, who wants to be in a professional society of watercolourists, they would say that you shouldn’t use black, or white. The “white” should be the bare paper left untouched, you shouldn’t use gouache, or acrylics to make white. But I do. Infact I do both, and sometimes use white

oil pastel as well to make hazy whites around a hard edge of white in my paintings. I showed her some of my paintings, hanging in my hallway, that had lots of black in them, like this one here “Room for improvement” and some white gouache in specific places in my tiger paintings in particular. I went on to explain that the reason that artists try not to use black paint in their watercolours is because it deadens the painting. She told me that she had been to the art classes of an artist (who it turned out I know very well on a personal and professional level) and hadn’t liked them at all because it was all about wet washes of pale colours on paper that wasn’t Bockingford, and she likes Bockingford. I smiled, and said that I much prefer Bockingford for the effects I can get with it! She then mentioned the name of a second artist – another one I know on a personal and professional level, and said that she hadn’t liked her classes either, because of the wet in wet way of painting, and painting lots of bright colours when all she could see was “green” not the purple that the artist was painting instead. I smiled, again, and could see her problem. And again she mentioned a third artist, one who I know very well, and have socialised with many times, who runs her own workshops, and the woman told me that she hadn’t liked that one either, because “The artist told me off for putting black branches on the trees she wanted me to paint, but it would have branches wouldn’t it? She obviously doesn’t look at nature in the same way that I do!” and added “Plus I paid her over £40 for that workshop and I didn’t like the picture I did at all!” and again I smiled in understanding and told her that “I hate those workshops where everyone does the same picture, and all go home with the identical image, I much prefer it when people paint what they want to, and put their own creativity into it!” To which her response was “If I don’t feel like painting a boat, no matter what the tutor choses,  I can’t get inspired over it” and five minutes later announced “I think you’re the artist for me, Jackie!”

She told me that she had been thinking about packing in painting, as she felt that she wasn’t getting anywhere, and that she thought she was no good, but when she showed me the paintings she’d brought with her that she’d done, I went through each of them, and told her instantly that she COULD paint, she just needed to learn how to make the pictures more specifically controlled so that the viewer knew where to look within the picture, without being confused with the focal point not being made clearby the contrasts of light and dark, and more detail being in one place, and not all over the place, the use of the tricks that professional artists use to make the picture work better. And learning all of that would instantly make her pictures better, and she would feel happier because she would know what she was doing, and not feel “stuck” everytime she started painting anything, because she had hit a glass ceiling of “I don’t like this picture but I don’t know what to do to make me like it ” which always means you stop painting and feel negative over it, and the next time you want to start a painting, you start in a negative mood too, which is never a good idea!

We worked on a painting later on in the session, a small canvas that she had bought ready prepared with honesty seeds stuck to it, and string as the twigs they would be attached to, and some textured medium scraped on to make a more interestingly textured backgroundwith the whole thing gessoed white. I asked her which colours she wanted to to it in, I didn’t choose them, she did. But I asked her why she had chosen them, and which colours she felt went with them, and we discussed it as we decided which were the best options. But if she had said she wanted red, blue and silver, or brown, grey and orange, instead of the maroon, gold, and green that she did choose, I would have been just as happy and been able to help her the same way. It was her choice, but I was her guide and artistic knowledge. She was happy because she had the control over the colours, and I was happy either way because I can adapt to other peoples ideas easily. Whilst she painted it, I showed her how to use the acrylic paints wet and thin like watercolours, thick and textured like oil paints, she applied the paint in a stippled effect, painted it on, and glazed thin layers over other thin layers to create optical mixing on the canvas. We discussed the focal points, where the light was coming from, counterchange (when a subject within a painting is painted light against dark, dark against light to add dramatic interest), and made adjustments within the picture as we went along. I explained that with acrylics, you can’t go wrong, you just keep going! And it doesn’t matter if the paint is half an inch thick, it’ll take it, unlike watercolours when any mistakes show and can’t easily be rectified.

At the end of the session, the woman had chosen the subject matter, colours, even the length of time she was with me, and felt a lot happier over her painting. She’s asked me to show her watercolours next time. It looks like the three other artists who taught her watercolours haven’t been able to help her. But I think I can.