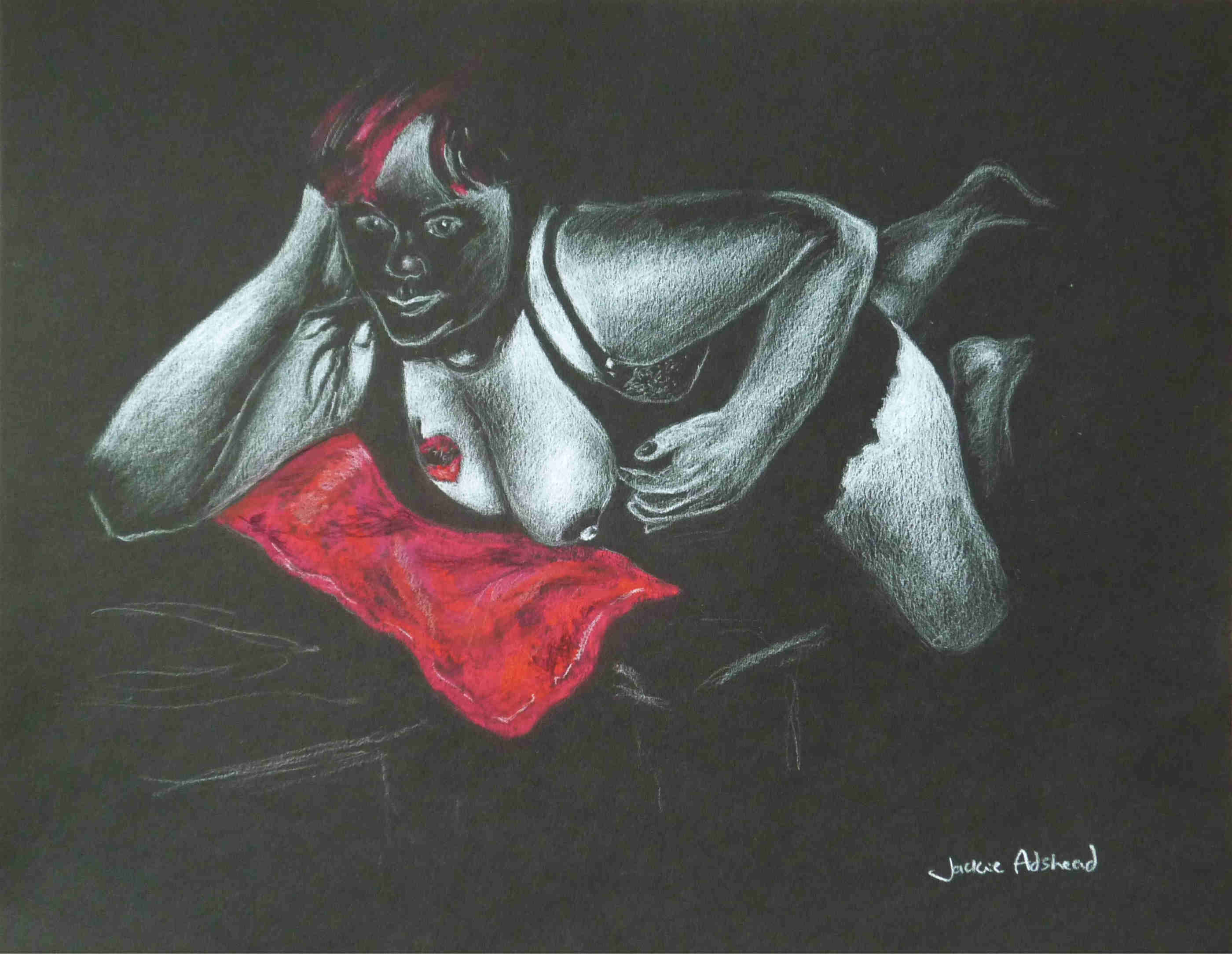 The new year has started well…..

The picture that I did for a surprise Christmas present can now be shown here. I never reveal it on my blog or website until I know the recipient has received the original piece of art, just incase it spoils the surprise for them. The woman who commissioned it from me texted me on Christmas day to tell me how much her husband loved it “over the moon” was her phrase, and I saw him over the weekend, and got a big hug and smiling face from him as he told me how pleased he was with it, getting a big cheesyÂ grin from me in return. The picture is called “Hearts for diamonds” and shows a woman lying in a suggestive pose, scantily clad in sexy lingerie as she looks knowingly and confidently at the viewer, the hint of a smile on her face full of promise as she very delicatelyÂ reveals her nipple, knowing how erotically provocative the pose is, waiting for her lovers response to reach forward and touch.Â  The three splashes of bright red compliment the white on black image, highlighting her hair, her heart tattoo, and the red cushion that she’s lying on.Â Â Â She toldÂ me that sheÂ hasÂ hung the pictureÂ in pride of place with some other of my white/red/black erotic pictures to compliment it, making a wall of my erotic art a showcase in their home.

The long weekend brought many things with it, including lots of fresh air and being with the sort of people who make me laugh and feed my mind. And without even trying to plan paintings, found that the idea for three totally diverse paintings came to me within a 24 hour period. It’s a while since that happened, usually it may be just one idea forÂ one painting, Â and none of them were looked for – but just *came* naturally and beautifully Â into my head when I was just in idle mode. I love it when that happens, since they have more natural empathy than when a picture is *forced* through a conceptÂ .Â  The first one, I need to start very soon, tomorrow I hope, whilst the idea is still fresh in my mind. The only clues I’m giving at the moment is the fact that it is of three simple clearÂ colours, and has moonlight in it. The rest is a very clear idea in my head, and a simple one, but it will be very effective too, and has the style of painting that I love so much with images hidden within it………

Â It’s a good sign for me, that the moon is calling again……..