The last week has been a blur of days out with my nephew and his friend. The highlight of which was probably Alton Towers which was their, and my, first visit. And although the thought of going on the well named Oblivion ride was too daunting even for teenage boys, they loved Nemesis (and I loved watching them on it, with my feet firmly on the ground, from the side-lines). We also went on some (far less scary) rides together, my man, them, and me, and since all of the male contingent came home dripping wet and sodden, it seems the day there was a great success!
Yesterday was their last day before heading back home, and I gave them the choice of the Space Centre at Leicester or the zoo at Twycross, and they astounded me by choosing the zoo. We arrived at lunchtime and had a bite of lunch before heading around the animal enclosures. One of the highlights, before we’d even set foot in the zoo, was a trip to the toilets. Now you may think that a strange thing to say, and think I don’t get much, but it was what was in the toilets (well not in the pans themselves, but the room!) that interested me. To be more specific, it was the display area behind the wash basins, in particular that caught my eye. As I washed my hands, I could see that behind the glass was a couple of long straight boughs. And had presumed that they were just decorative with a woody theme for the zoo. But there was more to it than that. Infact there seemed to be little sails gliding along it. How can that be…? Er…..? and I leant forward to see how little emerald green and bright red sales were gliding gaily along the boughs, and gasped in wonder as I realised what they were………
…. and after watching them for a few minutes, went to find my nephew and his friend to tell him what was in the ladies loo, and to ask them if there was the same phenomenon in the gents. They immediately hot footed it to the gents and came back a few minutes later with huge grins on their faces, yes, indeed, the same thing!
……..ants………
….walking along the boughs, back and forth, left and right, along the whole length of the display cabinet they were in, and the tiny sails, were infact, brightly coloured leaves! They had cut them, and were carrying them back to their nest, which was actually only a foot away from where the leaves were growing, but they had to take a detour of 30 feet to get there! How ingenious a display area, and as fascinating to watch the activity within as any fishtank. 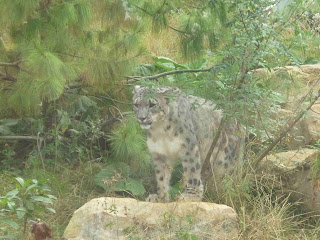 We went into the zoo proper, and spent a leisurely afternoon looking at all the animals there. No reptile house, no snakes, no lions, but there were a lot of primates, since that is what the zoo is known for. There were also some of my favourite animals there – the cheeky meercats who always seem to be having a good time in their noisy inquisitive communes, and the even more fun loving otters, who play around for the sheer frolicsome joy of it. Less playful but equally fascinating were the elephants, Scottish cats, and Gorillas. 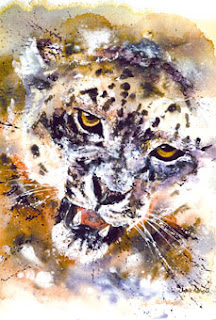 But it was at tail end (couldn’t resist that one!) of the day that we eventually found the one display area that I had been searching for – and behind the glass, in a beautiful setting of water, rocks, trees and shrubs, we found her. Sitting quietly, tucked behind some grass and rocks, she sat, ignoring the activity watching her, and her proud face, and fierce eyes showed no emotion. But I noticed that everyone behind the glass looking at her, was as fascinated with her as I was. Its not often you see a snow leopard, and its the second time I have done in the last two months- although one was in a zoo on French soil, and one here on English. I took as many photos as I could, because I love painting big cats, and have done a painting of a snow leopard some years before, showing the fury and life force of the feline to good effect – which I’ll show you here.
The highlights of the day seemed to be over, and we had a last walk around before the zoo closed for the night, so it wasn’t a planned thing to find the next place we went to. We wandered through an open door, and found a family group who were sitting down comfortably and just starting to have their evening meal. We stood as voyeurs do, to watch them. They were aware of us, but didn’t want to include us in their eating, and carried on, regardless of our impudence.  But there was one member of the group that caught my eye more than the others, and that was the youngest member, who wasn’t much more than a baby, with large round eyes, and a solemn air, made more quirky by the sticky up hair at the back of (his/her? I’ll go with his) head. The baby wanted to be with his mum and did whatever he could do to be with her, but whenever he got to her, she pulled him closer, kissed him, then firmly but lovingly gently pushed him along to fend for himself  for a bit. He went, reluctantly, and did as she bid him, but kept looking back to make sure she was close by, and as soon as he could he headed back to her. She leant over to him, hugged and kissed him again with reassurance, and gently but firmly pushed him along to be a little more independent. And so the pattern went, him going just far enough to follow her bidding, but heading back again as soon as he could. No words were spoken, but there was a lot of eye contact, and even the voyeurs could see the love and commitment between them. I stood there entranced, and knew I wanted to paint that scene before me, the loving family group, having their evening meal, as the baby took baby steps towards his independence. The mother tucked up under a blanket she’d placed over her head, the baby learning all he needed to know about life from her. But, unfortunately,  as it was time to go, we had to leave, and with smiles on our faces at the sight we’d witnessed. I don’t think I’ve ever seen a baby like that before, and certainly not ever been so close as we had been, to that little family group of vegetable chomping Orang-u-tangs.
But, what I have got, is a large amount of something that will help me to achieve my desire –  oh, yes! Photos! 🙂