Looking back – and forward 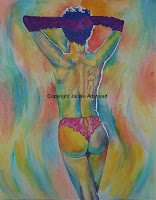 Well it’s been a funny sort of year – certainly art-wise I’ve not done as much as I’d have liked and yet when I look back I have actually achieved an awful  lot – I’ve continued with the Fantasy Fannies abstracts, painting more of the brightly coloured and highly popular Queyntes and Tarses in acrylics. That in turn led on to the innovative “Living flame” style of painting – translucent colours glazed over each other creating pretty colours to dramatic effect. As well as that I explored  making other abstracts, playing with colour and shape and creating fabulously exciting  paintings like “Interplay”, “Wishful thinking”, “Camouflage” and “Black jacket”. 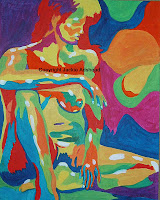 The “Fantasy Fannies” were also featured very favourably  in Jade magazine which helped to raise their profile as did the radio interview I did at Erotica.
I’ve also done the “S & M” watercolour painting – hiding the initials within the landscape, so only the people in the know know its there – I really enjoy hiding jokes and secret messages within my paintings and the people who commission them love the joke of it too – the ultimate conversation piece on your wall!

I’ve been told that I have a reassuringly friendly and professional way of drawing people that puts them at their ease, so that first time nude sitters feel relaxed and comfortable in my company – and the experience is not at *all* as scary as they expected!!!! That’s good to hear, then!!!! LOL
I’ve sold paintings to USA and Canada, and exhibited at Erotica at Olympia, London, for the second year running and feel more established there as an exhibitor. It’s hard work, but good fun, and I want to do more art fairs next year as I haven’t yet found a gallery that I like the look of to sell my work, and who, equally, likes the look of me. Perhaps I need to go to London to seek my fortune in that direction……………..like Dick Whittington ……..and his cat! 🙂
I’m still busy with the local art group that I’m connected with, as well as the Guild of Erotic Artists, and get a lot of help, advice, networking, support and satisfaction from being connected with them. Through them I meet lots of artists and photographers and people generally interested in art and the creative spirit, and that helps in turn to feed mine. Plus, I get some intriging conversations, usually of a very non vanilla subject matter!! 🙂
I’ve met some interesting people – quite a few men have offered themselves to pose for me, including one from San Francisco who occasionally comes to England on business and is very keen to be part of my creative output. And  a few others who I may be able to use at some point but the most important one was at the end of the year when  my new male model came into my life and after chatting to him for a while I felt that we could do some work together, and I’m delighted that the drawings of him I’ve done so far are of a high standard and I hope that it continues in that manner. The fact that he likes the same rock music as me, helps considerably!!! (if he’s been a Westlife fan, I’m not so sure we could have worked together! LOL).
Stuart with his outgoing personality and desire to help was a good friend to me throughout the year, and through him I did the talk to his local writers group which in turn led to me being offered a solo exhibition at the library next summer.
And added to the interesting people, is the publicist who has recently contacted me. He doesn’t live in England but did for a while, and has a lot of contacts. We’ve had a few preliminary conversations and I like what we’ve discussed so far but its very early days yet and may not be exactly what I’m lookiong for. But, if it goes the right way, and its too soon to say yet, I may be painting some very interesting and exciting erotic art next year……………watch this space! 🙂
So, into the new year, and I’ve already got a very interesting commission to do – for a male witch – a “Goddess” painting – seven heads of the same goddess, in whatever style I like, in whatever medium I like. But…….each goddess has to be recognisable. This one has got me thinking, and now Christmas is out of the way I can spend more time concentrating on it, because this is a big one and needs a lot of deep thought and focus. Also, I want to put some “magic” into the painting, somehow. As this isn’t an ordinary painting. It’s a special one, for a special person, for an extra-special reason, and that unique specialness should show within it. So, that makes me think that I may end up painting it twice – firstly as a practice painting to get the creative juices moving, and then as the proper one, the one when I dig into my spirit and pour it into the painting, that’s when the magic appears……….. and that’s what I want to build on next year, making magical paintings for people. The sort that talks to your spirit, your soul, the sort that you want on your walls because its an extension of who you are.
That’s what I paint.