Teal and gold calling me

I’ve had a frame for some years that I love, for the teal and gold colour scheme but also the distressed wood effect of it. When I had more time and life had settled down a bit I knew that I would paint a picture for it.

I didn’t necessarily want an overly complicated image as the picture would only be 14 x 10 inches.

So last week I drew out an image I liked the look of and played around with the colours knowing that it was basically going to feature gold coloured rock in turquoise sea with the sky above it, some trees, but mostly it was about the reflections in the water. When I was happy with it, I drew out the image on watercolour paper that I had stretched onto a board. The painting was going to be mostly watercolours but also with the option of other media if need be. What I wanted was the reflections of the water to be a big part of the painting, so I picked them out with masking fluid so I knew the pattern of them was protected before I started painting. I painted the sky first with a loose wash, making sure that I had a few fluffy parts of the clouds but also a few sharp edges.

I then painted the distant rock on the horizon, then the outcrop of rock on the right hand side of the picture, and the grassy bank and low cliffs of the left hand side. They weren’t the most important part of the picture but they led the eye around the picture and gave it more interest. When they were done I painted the sea starting on the horizon line using acrylic inks as I wanted a strong tone of the bright colour, so the dark turquoise was acrylic ink painted in, then before it had time to dry I quickly painted the paper with water and painted the paler turquoise in with

acrylic inks washing it down and blending it in to half way down to just behind the tower of rock, but making sure that I didn’t leave a hard edge of line where the join is for the rest of the water (quite technically difficult to do that bit and make it look natural!). Then I mixed two lots of watercolour washes for the next bit, one was the colour of gold and turquoises, and the older was more pale turquoise with bits of sea green, and then I quickly painted them on, the gold and turquoises for the reflection of the rock tower, and the paler turquoise and sea green for the sea on either side of it, down to the bottom, making sure it was all done quickly and whilst the paint had time to merge and mix together whilst the wash was wet but not to mix too much that they weren’t separate colours on the paper. That’s the joy of watercolours, being prepared, keeping it simple and natural and letting the white of the paper show through, its about control of the paint, and letting it tell the tale, without it looking overworked and messy. 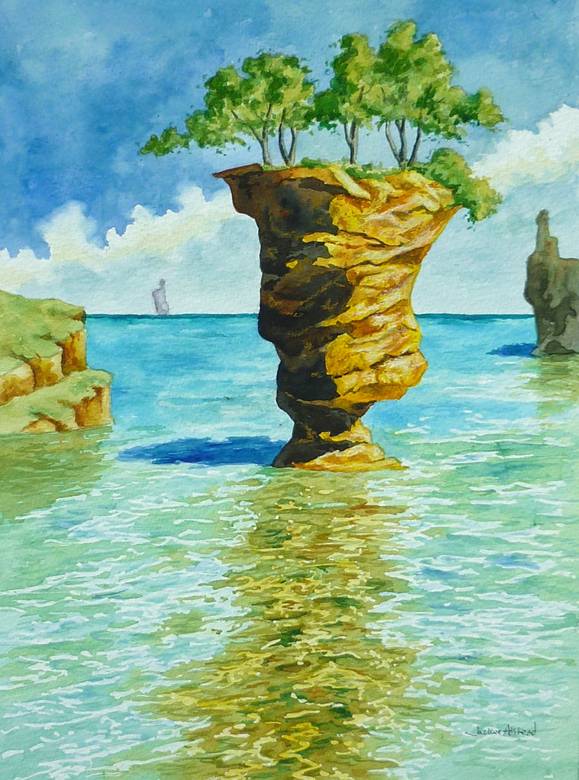 When that was done, I then turned my attention to the trees and quickly painted the foliage and the tree trunks. Then it was time for the rock tower and I knew that I wanted the colour to be strong, and again used acrylic inks and wetted the paper and put on the bright yellows and oranges of the sunlit side of the rocks, knowing that I would tone down the rocks afterwards. Then I wanted the dark side of the rock tower done, and I didn’t want to use inks as they can be a bit overpowering, so I mixed a strong brown with hints of burnt sienna in it and some indigo, and put that on the shadowy side of the rock, going over parts of it whilst it was still wet to double the colour and accentuate the darks and make it more interesting to look at than a flat black, I also painted fine fracture lines with the dark into the sunlight side of the rock to show the dark shadows there too, and make the rock look more interesting. I had purposely drawn the rock looking like it was teetering over the narrow lip at the bottom, and drew in more exaggerated angles to show how the rock was fractured and split. Then I went over the rock with wax pastels to tone down the bright yellows and oranges, and to add more texture into the sunlit side, and the shadowy side. I didn’t need to draw in every tiny bit of rock but hint at the light, the shadows, the texture and shapes.

When I had finished the rock I went over the reflections of the sea in the foreground, and rubbed off the masking fluid and just added colour and shapes in the water as I felt it needed it, its fun to paint water, there’s so much fluid movement in it, and I love painting it!

I love the way the picture has the vertical of the rock, the distant rock on the horizon, the rocky outcrop on the right hand side, it has the strong horizontal line of the horizon, and the diagonal of the cloud line pulling one side to the other, and the diagonal lines of the left hand low cliffs, and the diagonals of the fractures in the rock tower. And to soften it all up the flow of the water leading your eye through the picture. Strong geometric lines, and softer flowing ones, it makes the picture interesting even though its only a simple subject.

It was easy enough to name it as well – "Teal and gold reflections" – says it all!

And when I framed it, you can see how well the gold of the rock matches the frame, and the turquoises are picked out in the picture that the frame adds to and accentuates. A perfect match, I think! 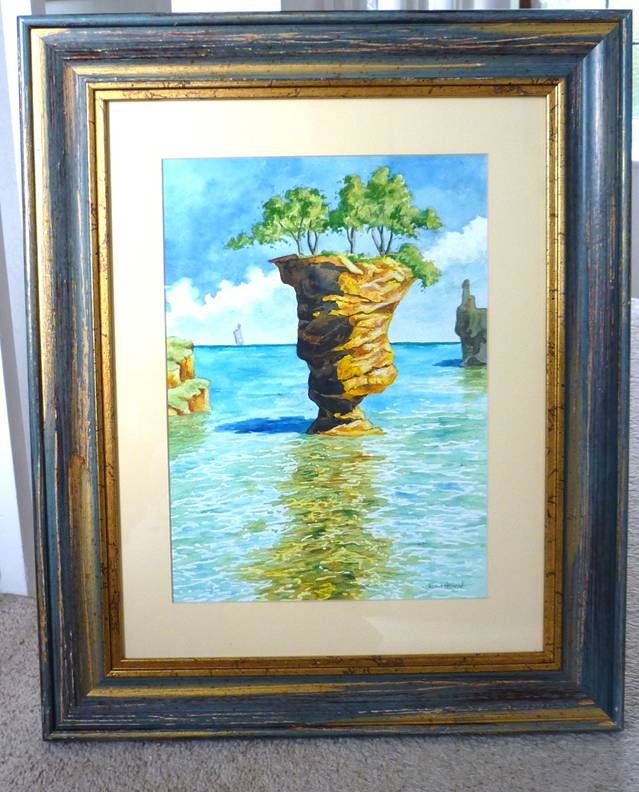