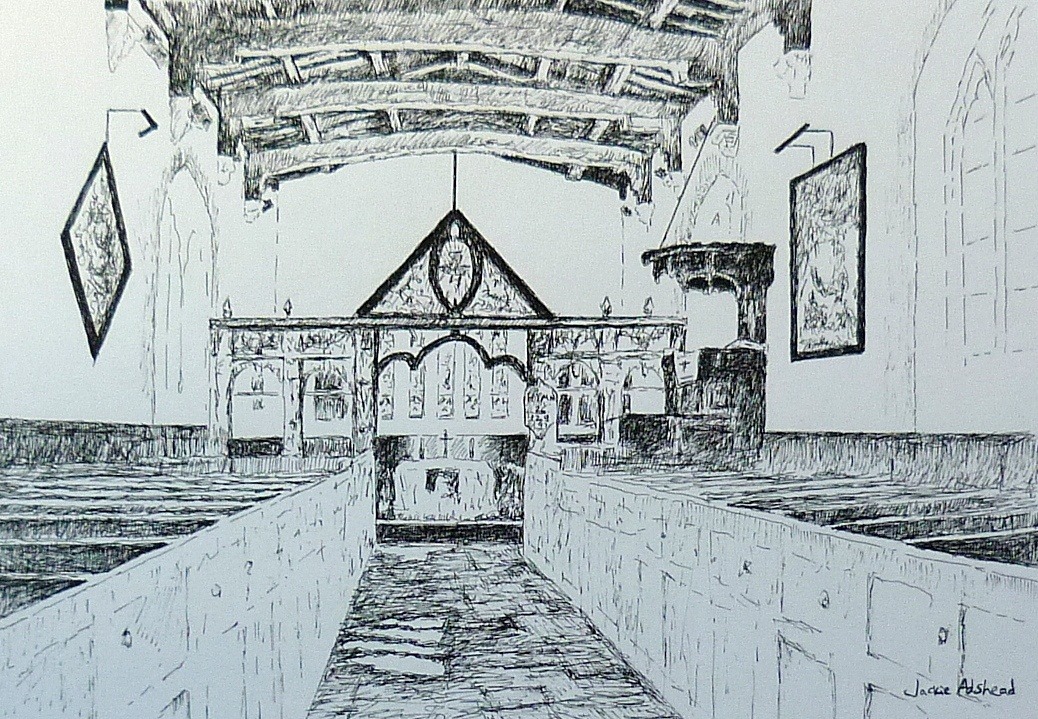 A gentle seed was set.. and it flowered this week

When I finished the drawing of St Saviours church interior and delivered it to the client who had commissioned it on Friday last week, she was delighted for it, and said the person who it was for would love it.. and then after a bit of conversation about it, she said wistfully that she would like a version of it for herself.

The church has played an important part of her life, and I said that I’d happily do a version of it for her if she wanted one. She said “But its unique, and for the other person ….and I’ve got enough pictures on my walls” and I said gently and with a smile “Well have a think about it and let me know if you want me to do one for you”. I drove home wondering if she would.

On Sunday evening the phone rang and it was her, asking me if she could commission me to do one for her too. I smiled at her asking me, and said I was delighted that she wanted me to it for her and that as far as I was concerned, that the picture was of the interior of a church, which anyone could have, and if a drawing of it made any one happy then they should have it on their wall and she agreed. We chatted about the picture, and as we chatted she mentioned a couple of aspects of her life that made me realise how important this drawing is for her, and I said that I would love to do it again, this time just for her.

So I’ve got the lovely job of doing it all over again, the same size as the original one (11 x 8 inches) but she will get it framed herself to match other artwork she has on her walls already.

I’ve started it and hope to get it delivered to her as soon as I can. And its funny that although I’ve done this drawing before, last week, I’ve got to match it as well as I can to the original one, which makes it slightly more complicated, when you’d think it would be easier! And as she said she had no idea how I started with doing this particular drawing, so I said that I would take photos of each stage to show it to her.. just like I did for the one last time..

It is wonderful to be back into drawing again and doing commissions that make people happy, and I love how I can touch so many lives through my art…!

And its funny doing this picture, at this time, as its the start of the accounting year on 6th April, and she asked me to do the picture a couple of days into that new year, so I’m looking at it as the start of me being an artist again, after me having to put it on hold whilst I sort out my personal life with all the changes that have happened this last 18 months!