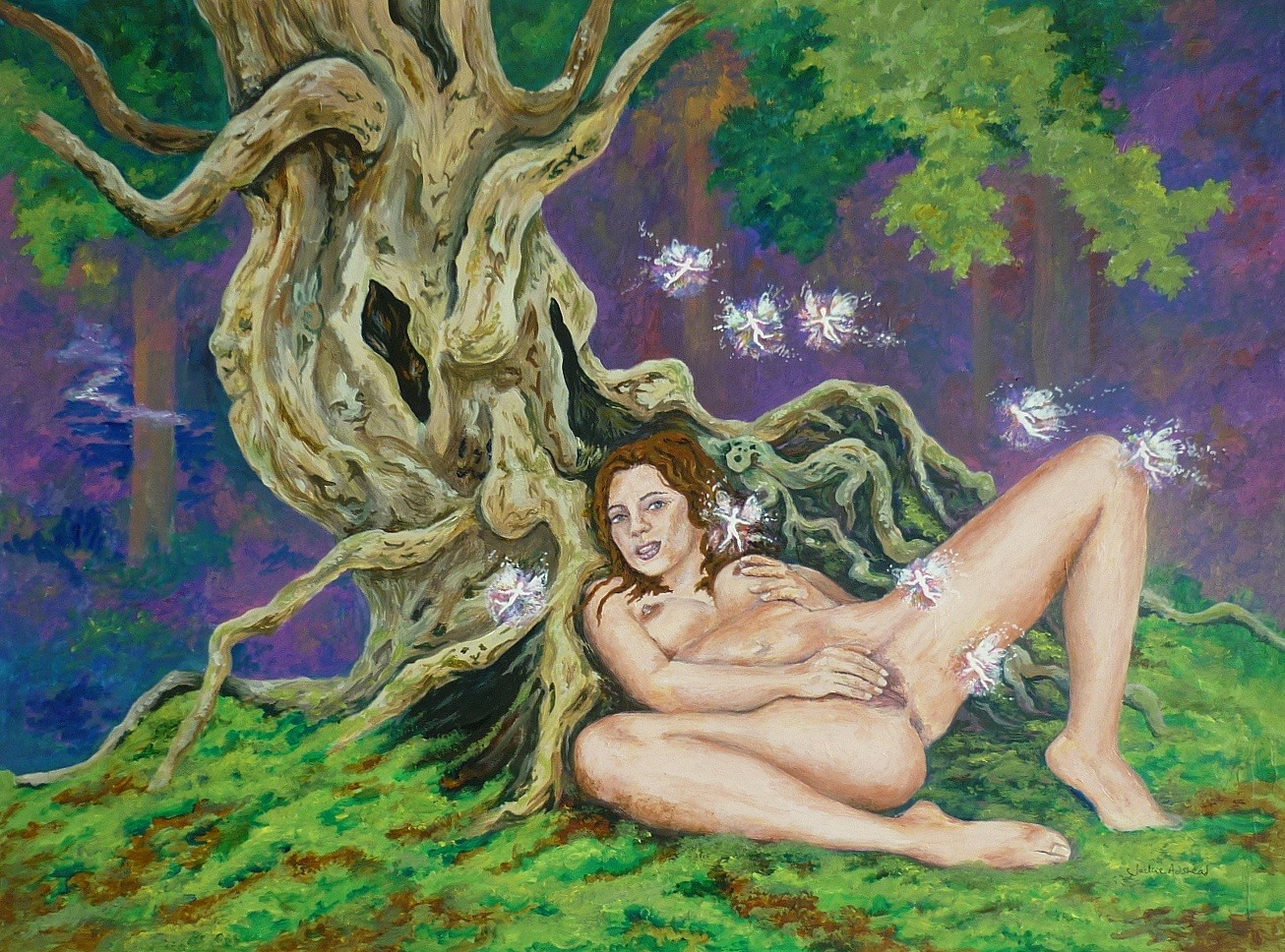 Once finished and even better than I hoped it would be!

The notes I had made from the books pages were:

“A hushed world, shaded and cool shafts of sunlight angling through the twilight in long shimmering beams.
He came upon a huge oak tree one easily remembered because of its age and shear scariness, gnarled bark seemed to contain images carvings that were not quite discernible resembling grotesque twisted figures and tortured faces.
Like fireflies from bright silver to violet from white to pale green, iridescent and twinkling, the dancing lights sparkled. Seven of them glimmerings as bright as diamonds and looking as delicate as snowflakes they flittered in and out of the leaves. Their peripheries appeared to take on every hue of the spectrum, they sparkled as they zipped through the air like brilliant insects in spectacular display. Like dragonflies they sometimes hovered blue of tiny pellucid wings.
These delicately beautiful creatures were the darting satellites of a quite ethereal reclining figure whose flesh was so white it might have been purest marble, it was human, it was a girl, her skin unblemished, her curves slightly rounded, her naked breasts small, the most sensual figure he’d ever seen. She lay back between two stout roots of a large oak, the thick gnarled limbs spread like welcoming arms around her, long yellow hair, small face finely pointed chin, high cheekbones, narrow shoulders, a cascade of wild golden locks, her lips parted pink and moist in passion her slender body writhed lanquidly, her body slight, her breasts small but mature and beautifully formed, slight roundness of stomach, hairless place between her thighs, long fingers soothed and fondled, the tiny lights shared her frenzy and ecstacy, a few went to her erect nipples, she was not tall, a fraction less than five feet, unconcealed wantonness, age indeterminate, eyes closed in rapture.”

I had drawn it out as a small image to check the shapes work well for the painting, and then painted the first couple of layers of the proper painting to get the hazy pinky blue background colours in and when that was done, I concentrated on the gnarled old grotesque oak tree, painting it, then looking for the parts of the tree that lent itself to hiding faces in it – some large and obvious, and some small and hidden.

umber always adds more interest than an even one, and as I placed them around her, I added tiny spectrum colours within the white of their bodies, and added small movements within their wing area to give the impression of movement as they hovered around her. It was actually quite difficult to get their tiny bodies with some detail but not too much. I love the one that is tickling her nipple with its tiny foot!! I also added as a bit of fun, a faint white streak coming from the tree on the left of the picture, as a reminder of another fairy hastily on its way to join the fun!!

I know that I have painted 23 grotesque faces within the old oak tree but I also know that people often see more faces hidden within my paintings than I plan – it adds to the magic and mystery I think! But as well as the 23 hidden faces there is another one, hidden as the tree itself if you look closely..

And as well as that, there is a hidden fanny, somewhere in the picture…….