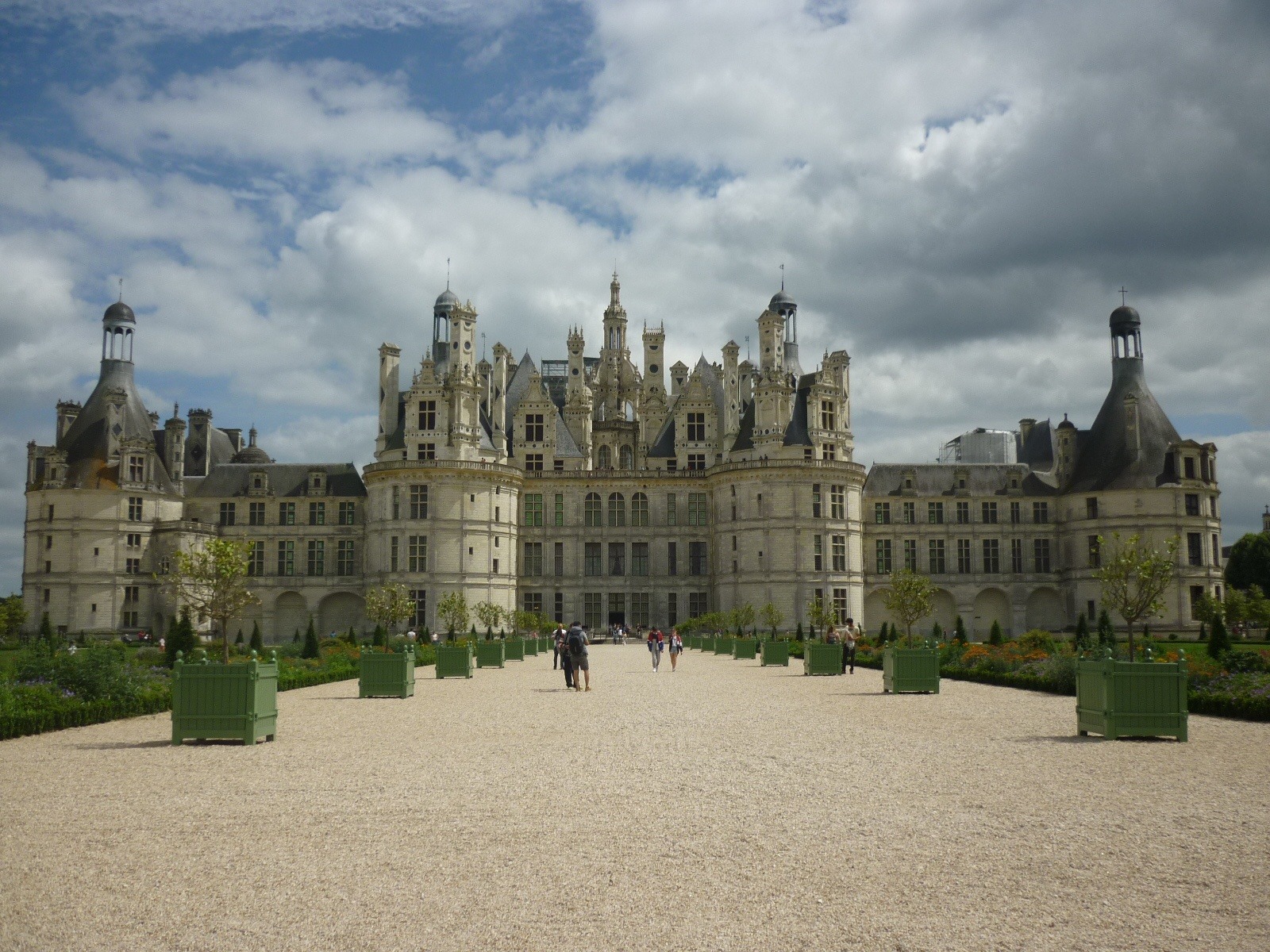 Falling in love with France again

Its been seven years since I last had a holiday in France and I’d forgotten what a wonderful country it is.

night (since we weren’t sure how far we could get towards the Loire Valley area) ended up in Chartres for the night. The second day we got to Amboise  on the Loire river which we had stayed at before seven years ago and liked a lot, it has a chateau and is a pretty town and not too busy. We had two wonderful nights there and visited one of the chateaus in the area – Chambord  – which was the most stunningly beautiful building I have ever seen!! And I estimated that half of the building was just for flamboyant decadent fun and had no practical use at all! I loved seeing it and took loads of photos from every angle I could find!!

The next day we headed south, since we were travelling the whole length of France and wanted to get as much mileage done that day – the autoroute roads are brilliant although you have to pay the toll to use them, its a matter of choice and there are many “Aires” to stay at where there are public toilets, and some of them have excellent food for sale (this is France!) and of course picnic places since everywhere in France stops for lunch between 12-2pm !! We saw what looked like an interesting place to stay from the road – St Flour – which was a village split between half of it down in the valley and the other half at the top of a high hilly outcrop.

We checked into a quirky hotel there which had only one thing in its favour and that was the stupendous view!!

The next day we headed south again driving through more hilly areas and arrived at Cap d’Agde on the Tuesday we checked into a nice hotel by a small beach and overlooking the Mediterranean sea – we’d got to the other side of France!! We had an idyllic week there by the beach and left the following week and headed back a different way to see a different part of the country and went to stay two nights in Cluny. The town grew up around the Benedictine Abbey founded in 910. The height of Cluny influence was from the second half of the 10th century through the early 12th and it almost became the home of the Pope before they decided on Rome instead. The abbey was sacked by the Hugenots in 1562, and many of its valuable manuscripts were destroyed or removed. The remains of the Abbey are still there and you get a wonderful feel for the massive size of it as you walk around the pretty town. The hotel we stayed in overlooked the main square, and was lovely. We took loads of photos of Cluny I thought it was a fabulously interesting place with the old medieval  facades to the houses and ancient stonework.

The next day we headed north again and had a night in Vendome, the hotel was quirky and

the town just ok but the food was excellent.

We headed north again on the Saturday and got back to the English Channel by mid afternoon – having travelled the length of France twice!! We had a couple of days before the ferry so had aimed towards the Normandy beaches area to see where the D Day landings had taken place during World War 2 – we arrived at Caen and travelled on to Arromanches and had a very poignant walk around the little town and beach – it was so weird to be looking a

t the process of death and war with the tanks there when there were children on the beach having a nice holiday time. We had wanted to stay the night in Arromanches but there were no available hotel rooms so we decided to drive east along the coast to see what the next towns had in the way of accommodation. As we drove through the many pretty little towns it quickly became apparent that there were no hotel rooms available. It was Saturday, and on the coast, so our choices were already booked up. On the two previous Saturdays in France the accommodation we had chosen and booked weeks in advance. By 7pm we decided the best option was to head towards Dieppe which we needed for the ferry on the Monday, thinking that at least we might be able to have two nights in a hotel there, we had a quick bite to eat and headed 100 miles or so towards Dieppe – a busy ferry port, they were bound to have lots of available hotels free we decided. We eventually bedded down just outside Dieppe. And found out afterwards that Dieppe was full of a motor bikers convention which was really dramatic to see and hear!

We needed a different hotel room for that last night in France though and there was no point in staying just in Dieppe even though we were going to catch a ferry from there the following day. We looked at the map and deci

ded to head directly inland to the nearest small town and ended up in a non descript little town I can’t even remember the name of. As it was our last day in France I was hoping to do something nice and fortunately there was what was billed as “Frances prettiest village” 7 miles away.. we went to have a look, and indeed it was!! It was the perfect end to the holiday – going to Gerberoy  was a delight!! It was full of pretty painted half timbered houses and flowers everywhere so I was in heaven taking photos of them all although it was a very hot sunny day. We spent about four hours there wandering around trying to find bits of shade and taking photos.

We drove back to Dieppe the following morning, leaving early to be on the ferry in plenty of time. The ferry crossing was comfortable but terrific winds when we went on deck – it was good to see England again and they had had the same very hot sunny weather we had had all holiday. My fella had suggested when we booked the holiday that it would be nice to have a night in Brighton since it wa

s close to Newhaven and we had booked a night in The Grand hotel with a lovely seaview room which I thought would be a perfect end to the holiday since I’d never been to Brighton before and heard very good reports about it. We arrived at the Grand about 5ish checked into the hotel and our lovely room overlooking the beach, and had a glass or two of wine to celebrate the end of a wonderful holiday before changing and going down to have cocktails in the bar area and then a delicious meal in the restaurant.

The following day was the day to head home and after a delicious breakfast in the hotel we had a quick walk through The Lanes to the Royal Pavillion about ten minutes walk away, which is an exotic palace in the centre of Brighton with a colourful history – it was built as a seaside pleasure palace for King George IV and mixes Regency grandeur with the visual style of India and China. To see it was a joy with the sun shining on the strange quirky architecture, but we were disappointed in The Lanes which I had been lead to believe were cobbled stoned (they weren’t) and had quirky creative s

hops selling interesting items (they were mostly jewellery shops and expensive womens clothing). We weren’t impressed at all, other than the Royal Pavillion which was stunning. Just after we checked out of The Grand we were told that the hotel room we had stayed in was the one that contained the bomb that blew up the Conservative conference in 1984…….

We arrived home later that afternoon – a total of 2282 miles driven.

It was an excellent holiday, surreal in parts, and I was reminded again about how much I love France, and the French people who are always friendly and helpful and pleasant. I hadn’t realised how many trees there are in France, or how big the skies are!