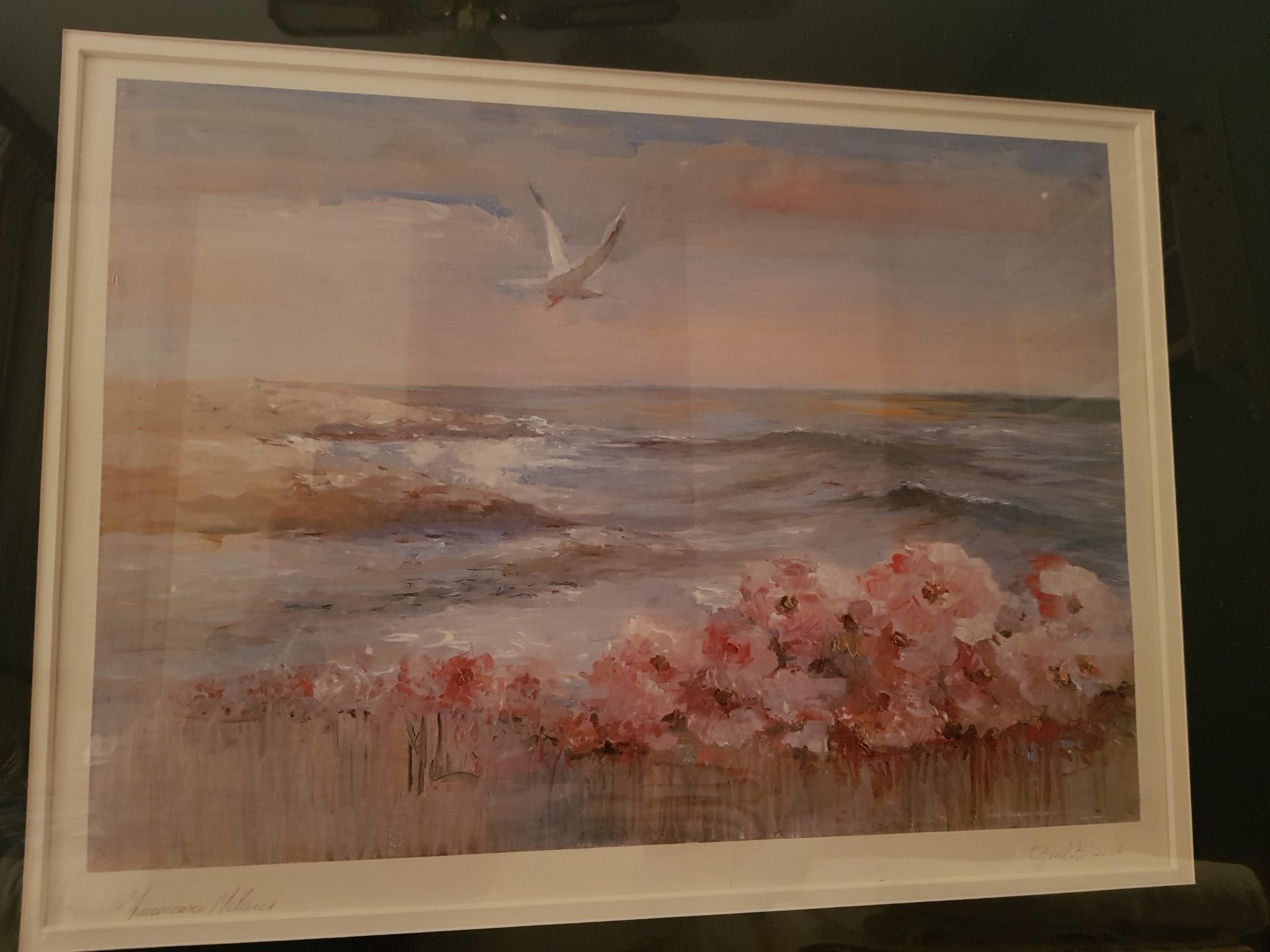 When my friend asked me a few weeks ago to look into the art mystery for her I had presumed it was relating to a painting she had bought a few years ago…….I hadn’t appreciated that the mystery had been one that she had had for fifteen long years !!

All I knew was the painting was a nice one, that she loved it, and that she wondered who the artist was. She had never been able to read the artists name, or ascertain exactly what the letters were that made up the name.. and looking at them I could see exactly what she meant! It wasn’t a painting I knew at all, although there are so many artists doing so many paintings that didn’t really surprise me! It didn’t help that the writing on the right hand side of the painting (where usually artists sign their names) was one word, whereas on the left hand side of the painting (where the title of the painting would normally be) there were clearly two words. When I looked at the word on the right hand side I presumed it was the artists name, although since it was one word I presumed that it might be a nick-name that the artist used, rather than a full name – which was certainly going to make the searching more difficult.

I also knew that my friend had presumed, like me, that the name wasn’t English, and she wondered if it was Indonesian, and had searched through all artwork she could from Indonesia, to no avail. She also had a lot of confidence in that if anyone could find it, I could, which I found very trusting!!

Ok, detective Jackie to the ready..

My first task was to write out all the permutations of what each word looked like in the flowing script… the single word looked like it MIGHT be…. GOBBIOUN, GABBIAUD, GABBRIAR, GOBBIOUA, GABBIAUO or anything similar!

The two words were even more difficult as I couldn’t ascertain even what the first word began with, it could have been F, J, Y,  or a T. and in which case it could have spelt …FUIXCUZO, JUW..CUZO, YUIXCUZO, JUIXCUZO, JAUOCUZO, TAUICUZO, or anything similar!!  The second word seemed slightly easier in that it looked like MELOUI, MELAUI, or MELONI.

I started searching for the word Meloui and that came up as a Morroccan panbread, so I looked into Moroccan artists for a while to no avail…

I searched artists in ARTNET  whose surname might begin with M.. and came up with various permutations, the best and most likely options being ALTOBELLO MELONI (Italian), FRANCESCO ANTONIO MELONI (Italian), LORENZO MELONI, GINO GIOVANNI MELONI (Italian, but his artwork was too modern in style), FERNANDO MELANI  (too modern again), JOSEPH URBAN MELIN (French), FEDERICO MELIS (Too plain artwork) or J MELIS. All possibilities, but not exactly the right one…

After more than two hours, I had found who it wasn’t, but not who it WAS !!

So I thought I’d change the

way I was searching and concentrate more on the single word, and decided that it might be a foreign word… and it seemed to read “GABBIANO”.. which sounded Italian to me with the “O” on the end of it and lo and behold, when I translated it in an Italian-English dictionary, I had my first breakthrough… “GABBIANO” in Italian means “SEAGULL” – and guess what was in the picture – a flying seagull! Yay!! Success! I’d found the title of the painting!!

I know it wasn’t much, but it helped immensely!!

Thank goodness for Google… because when I searched “GABBIANO”  as a painting up came another name and that was “MELANI” – and when I looked closely at the second name again, it COULD have been “MELANI” ! Ok, another success, I had the artists surname… and after a bit more searching found out that the first name that looked like it was “FUIXCUZO” was ACTUALLY………………”INNOCENZO” !!!!!! Even when I looked closely at the letters again, it was hard to read those letters there!!

After searching the name a bit more the most I could find after four hours or so was that he was Italian, and born in 1933. That was it. No more details, no more artwork, no country of living, no galleries he had exhibited at, or even if he was still alive…..

But when I told my friend what I had found, she was delighted, delighted that I had found it and said that if anyone could find, it it was me (which I thought was really kind of her to say). And now she has the providence of her beloved painting, she knows the artist name,  when he was born, his nationality, and the title of the painting…

And she now has something more to search into and is going to keep me updated with her findings! 🙂