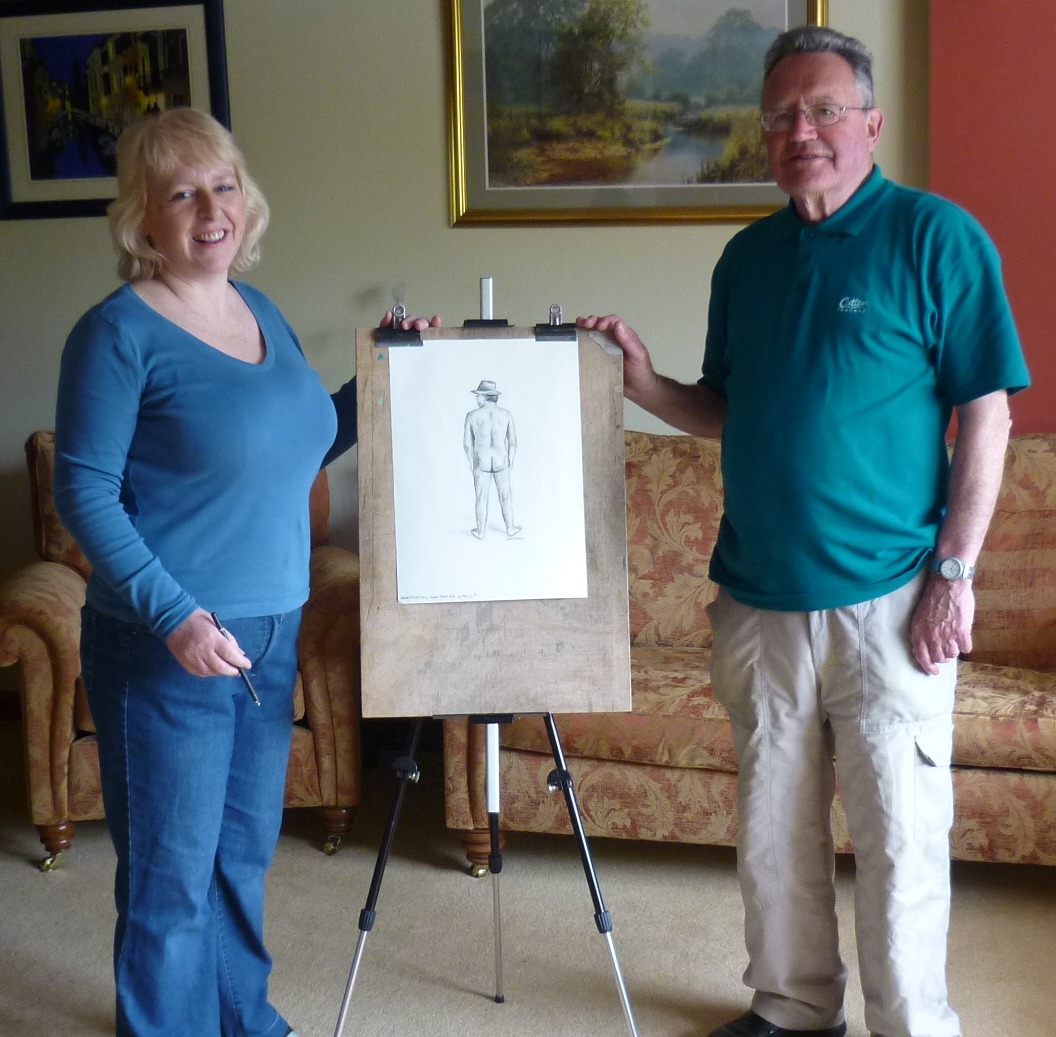 The day I had to ring The Sun, The Mirror, and the Daily Mail

I had an email this week from my writer/new nudist friend Stuart who likes to get his name in print. The fact that he has become a nudist in his 70’s through meeting me and posing for some drawings in the nude amuses me. He was as nervous as anything the day he came to my house to pose for the life drawings he wanted doing, and yet since then, he has gained lots of confidence through my making it a very positive experience for him to the point that he has fully embraced being a nudist by doing a naked charity bike ride, and having his holidays at a clothing optional venue in Lincolnshire. And this summer he and his wife decided to renew their fifty five golden years together wedding vows at the same place, since it is somewhere they love and feel comfortable. His wife is happier clothed, he is happier naked, so the place was ideal.

Since then, as he writes regularly for the Burton Mail and Derby Telegraph papers about his extensive knowledge of local history, they have picked up the story (understandably!) and sent along a journalist to interview him.

Since that quirky article was in print the Press Association picked up the story and sent along a journalist to interview him.

I know all about this, as Stuart has kindly kept me informed as things have progressed.

But although this is Stuarts story, it does actually affect me. I am not mentioned particularly in the article, other than a vague reference to a local artist. That’s fine, like I say, its Stuart’s story.

But how it affects me is that I am caught up in it as some of the photos they have used online with the Press Association are my copyright photos.

I know that artists receive a reproduction fee for having their copyright photos used online. So, a month ago I rang the Press Association and spoke to the helpful and friendly woman who had interviewed Stuart about the possibility of whether I was due a fee for my photos being used. She explained beautifully that I was not, as I would be paid by publicity (artists are used to this, and know sometimes publicity is very useful to promote their career) BUT if it was picked up by other publications, then I would be.

Ok, watch this space then, and see what happens………

The Daily Mail online picked it up.

The Sun online picked it up.

The Mirror online picked it up.

But where did I stand? After speaking to Stuart, who wasn’t sure, and who said that he had been told in the past by a newspaper person that they only pay out for using photos if someone asks for the fee, I decided the best thing was to ring each paper and find out.

So yesterday morning, I started with the Mirror… who when I spoke to a helpful woman in their Pictures department about my connection to Stuart, and whether I was due a fee, asked me to email her with the link to the article, and after she had ascertained that it was my copyright photo she said she would sort the payment out for me. Yay. One done.

Next, I rang the Sun, and spoke to a very helpful young man who told me he would get the Pictures Editor to ring me back within ten minutes, after I explained about the article they had used, and my copyright fee due on the photo. The Pictures Editor did indeed ring me back within the ten minutes, and had obviously checked the article in that time as he said that since they had got it from the Press Association, I should speak to them about it and gave me a contact number.

Okay…. that was where it all started from. But the number I had been given was a different number from the original one I had used for the Press Association as it was their Photos Department. I duly rang the number, a woman answered, I started explaining my problem, and she surreally said “Hello Jackie, its me!” and I realised it was the original woman journalist who I’d spoken to a month ago….!

And again, after I had said she had explained it fully beforehand, but since I was caught up on Stuarts coat-tails regarding his article, about him, but using my photos, I wasn’t sure if it had affected me now… since it had now been picked up by other papers.  Things had changed regarding it.

But …….it seemed they hadn’t! As she helpfully explained that since this was done through them online, it didn’t matter how many other papers picked it up online, that arrangement meant that………………………………. I was not due a fee.

No point in ringing the Daily Mail then!

And later on that afternoon the helpful woman at the Mirror emailed me to say that it had been done via the Press Association, so I should contact them instead and asked for me to keep her informed…. already done it, I replied, and no, I’m not due a fee…!

Its been an interesting exercise. I started off with nothing, expected nothing, and got nothing!  🙂