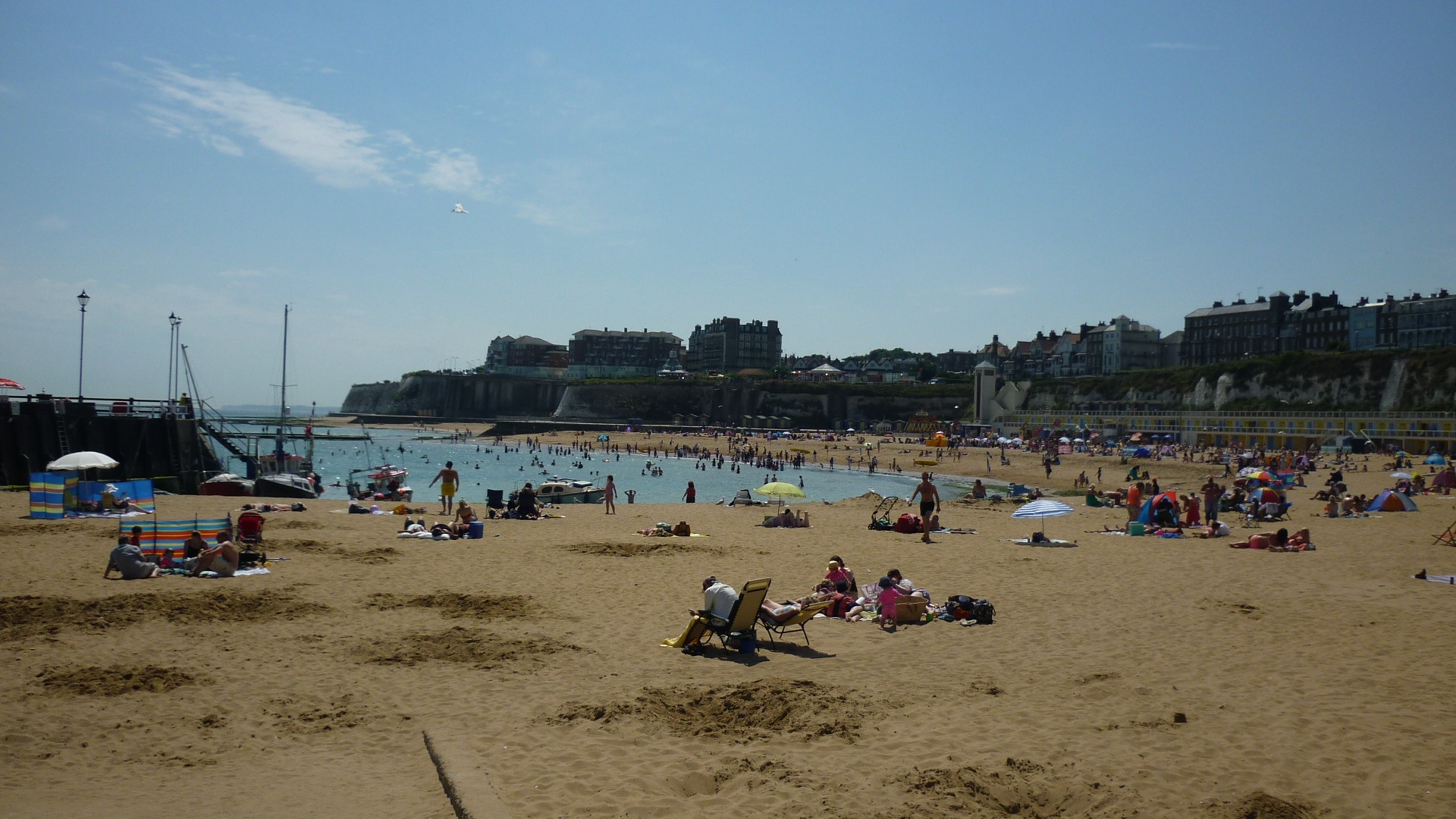 I’m just back from another wonderful holiday in the picturesque county of Kent. I’ve seen a lot of the world, and know parts of England very well, but Kent is still a newish discovery for me and one I am still loving exploring.

The weather was mixed, starting off with clear blue skies and hot sunshine and ending in mizzle, so looking through my holiday photos it looks like two different locations at totally opposite times of the year, high summer, and deep winter. But that is the joy (!) of holidaying in England, you never quite know what the weather will be and it can make or break a visit anywhere.

of being worthy of note, but Broadstairs surprisingly reminded me in some ways of St Ives in Cornwall that I adore. A golden sandy bay underneath the cliffs as the town curves around it and the sea wall juts out into the North Sea. And on the day I went it it was full of happy holidaymakers on the beach and splashing about in the sea adding to the ambience. Further down the coast we went to another delight, Botany Bay which was tucked down the end of a suburban road but was another golden sandy beach with the soft chalky white cliffs eroded away to make a seperate stack and giving me loads of photo opportunities for light and shadow on sand and sea.

My next high spot was going to Aylesford a few days later and seeing the ancient packhorse bridge over the River Medway. I love old stonework with water so was in my element there amongst the medieval buildings.

Towards the end of the week when the weather turned colder and greyer and wetter, we went to Reculver which was a place I’ve never heard of, but was just the sort of quirky place I love. It had originally been a Roman fort here  on the banks of a river but the river Wantsum (lo

ve that name!) silted up and after the Romans left the stones fell into disrepair and many years later someone decided to make the remaining buildings into a large church. As time wore on

the sea ate more and more into the cliffs it stood on, and the church became abandoned leaving it to its fate of weather and ocean waves. Now it stands as a ruin just a ciouple of feet from the pounding sea below it, but the twin towers an instantly recognisable silhouette for travellers on land or sea. I loved it! It was very windswept Gothic and dramatic!

But of all the lovely thin

gs I’ve seen on this trip, the best part by far was going to an old house set in a gently sloping valley, with a large lake nearby and surrounded by grassy parkland and tall trees. This house was the childhood home of someone who helped change the history of this country to a massive effect and yet it looked quite benign as it sat solidly in its bucolic setting. I’ve wanted to visit this house for many years and now had the chance. Hever Castle was everything I had hoped it would be, and seeing the fabulous house of Ann Boleyn was a joy. The sunshine added to the day, and I took loads and loads of photos which is always a good sign of how much I love a place. Of course the Italianate gardens, water maze, and large group of mock Tudor buildings behind weren’t there when Ann Boleyn lived there, they are a recent addition added when the Astors invested millions into the castle in the early 1900’s. But houses evolve and this one has been done in the most tasteful of ways. An absolute joy for me.