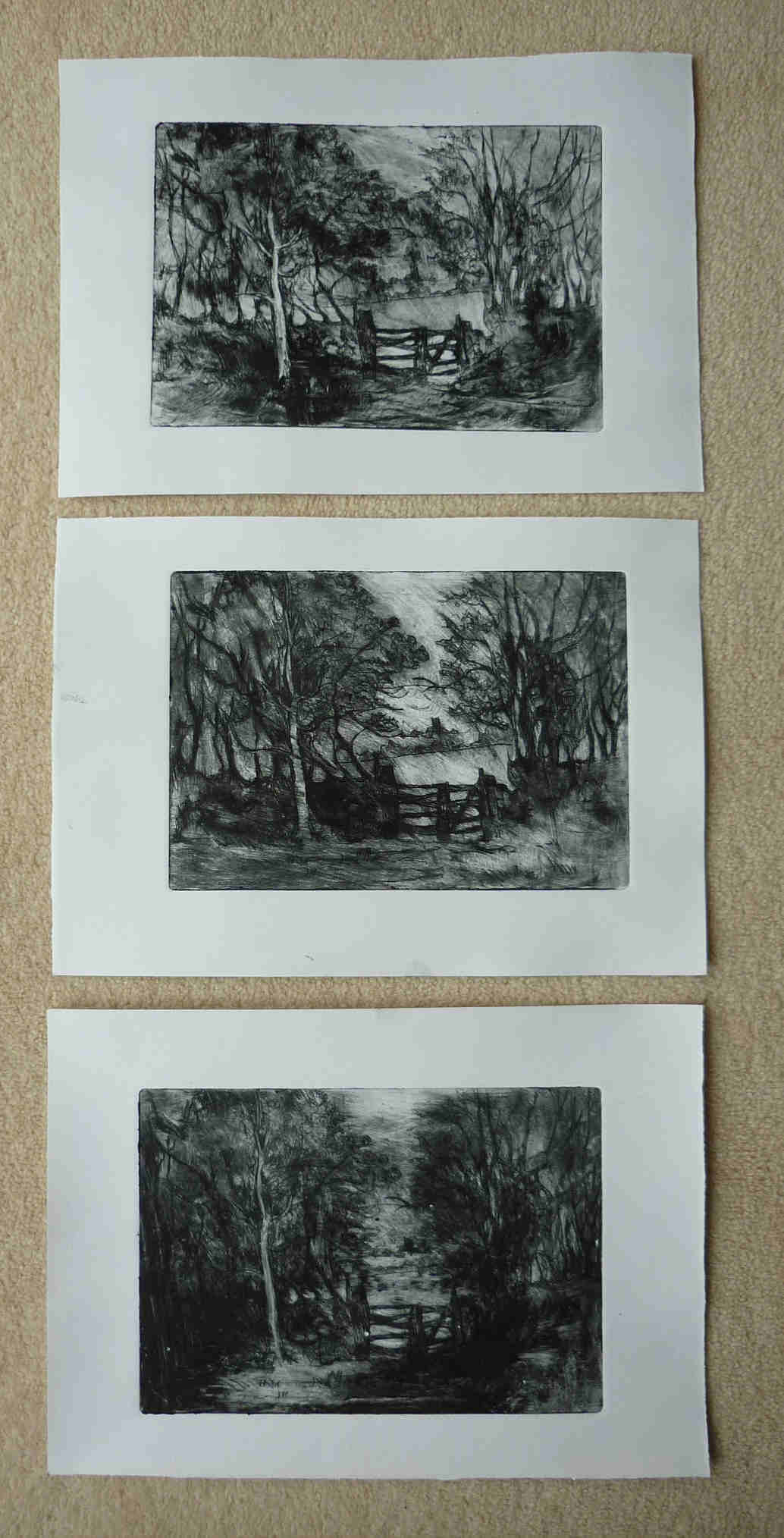 Would you like to come up and see my etchings ?

Its an old English joke – or at least it used to be when I was a teenager, that if you said to someone “Would you like to come up andÂ see my etchings?” it meant you were inviting them back to your place for sexual congress.Â  I’m not sure where it originates, but it was always met with aÂ dirty snigger and aÂ  lascivious leer if you said it to your friends!

I went to a printing workshop on Saturday, and knew that it wouldn’t be a the normal sort where you paint something in watercolours with a brush, nah, this was gonna get messy! And it certainly did! And I love messy workshops!

Â I know there are many different styles and types of printing but this one was dry point intaglio printing. To make it slightly easier for the pupils, we etched our image onto an acrylic sheet. The image is scratched into the plate using a sharp point, the marks do not have to be deep, even fine lines will print,Â  but we had to remember thatÂ  printing will reverse or â€˜flipâ€™ the image, so weÂ hadÂ to scratch the image â€˜back to frontâ€™ . When the plate is finished, it has to be inked. A sticky intaglio ink is applied (this can be done with a leather dabber, but a piece of stiff card works well) making sure that all the marks are filled with ink.Â  Then we scraped the surplus ink from the plate with card and then wiped with paperÂ  (newspaper is fine but soft paper such as kitchen roll will lift the ink from the image).Â Â The plate is then placed on the bed of a printing press and a piece of damp paper is placed on top. A thick blanket is placed on top and the bed is then passed through the rollers. The pressure from the rollers forces the damp paper INTO the plate lifting the ink from belowÂ to form the image.Â You then examine the print, and then experiment with inking and wiping methods. Huge differences to the qualities of the print can be made simply by leaving more ink in places, or wiping more thoroughly in others.Â  You can also use cotton buds to remove small quantities of ink in specific areas.Â Apparently Rembrandt produced many beautiful etchings in his life and frequently worked into them with dry-point.

Â I had a number of s

ource photos with me that I thought I might use,Â  and opted for one of a stream tumbling under an old stone stone bridge by a lone tree as my first image. We could use whatever we wanted as inspirational images, some people had taken pictures of flowers, some of birds, some of buildings, but I’d opted for landscapes. Quickly drawing it out, and trying theÂ  printing to see how it turned out.Â That’s part of the fun, the not knowing exactly how it willÂ look. Because with theÂ dry point marking, it was a bit like drawing in the negative, because where you scratched the acrylic sheet it would appear black on the print, and where you left the sheetÂ unmarked it would print white. We placed theÂ sheet on top of a sheet of black cardÂ so it was easier to see the marks we made.

And then the exciting part – the print itself. And theÂ think I found most fascinating, was that although it was always the same printing plate, on the same paper, it dependedÂ how much ink was put on, how much rubbed off, whereÂ itÂ was rubbed off, and what with, that made each one totally unique! So, some were more moody than others, some more dramatic! ItÂ quite addictive toÂ try again, and again, to see how they would turn out!Â  And very, very creative, just how I like it! ButÂ IÂ wanted to try anotherÂ design before the day was out, and Â quickly found another photo I liked but had to extend the imageÂ  in all directions to fit the plate I was inscribing on, realising that I had to rush to get it done in the time allotted – and this is where serendipity came into it, as to make the marks

individually with an inscriber would have taken all day, but using a small sheet of rough sand paper scratched inÂ  some of the marks a lot quicker with stupendously interesting effects. I inked up the plate and when it was printed on the paper the tutor commented “Moody and magnificent!” when he saw it, and that was my reaction to it too! I inked another plate, removing ink with a cotton bud and tried again, and this one was different again. The third printing proved to be a different one altogether. I put them all out on newspaper on my work bench to dry out and looked at them all together, and loved them, particularly the three with the rustic gate and the trees by the stone walls.

I came home with black ink all over my nails and hands, although after a good scrub it washed off,Â  well eventually, using hand barrier cream beforehand, and knowing that the ink is water based, helped.Â  And I love my etchings – really love them! Because the creative process has added aÂ  unique character to each one, and when viewed together, as they are here, you can see what I mean. And I think its viewing them all together as a group that shows them off the best way, particularly the gate picture, because in the top image its the white trunk of the tree that stands out well against the black wall behind it, in the second one the church in the background is more prominent with the branches of the trees framing it, and with the third its the lighted glade effect by the white trunk that creates the shadow effect so well, and in all of them the rustic gate takes on a life of its own too. Its like the same image but with different weather in each one, soft sunshine, strong sunshine, at different times of day.