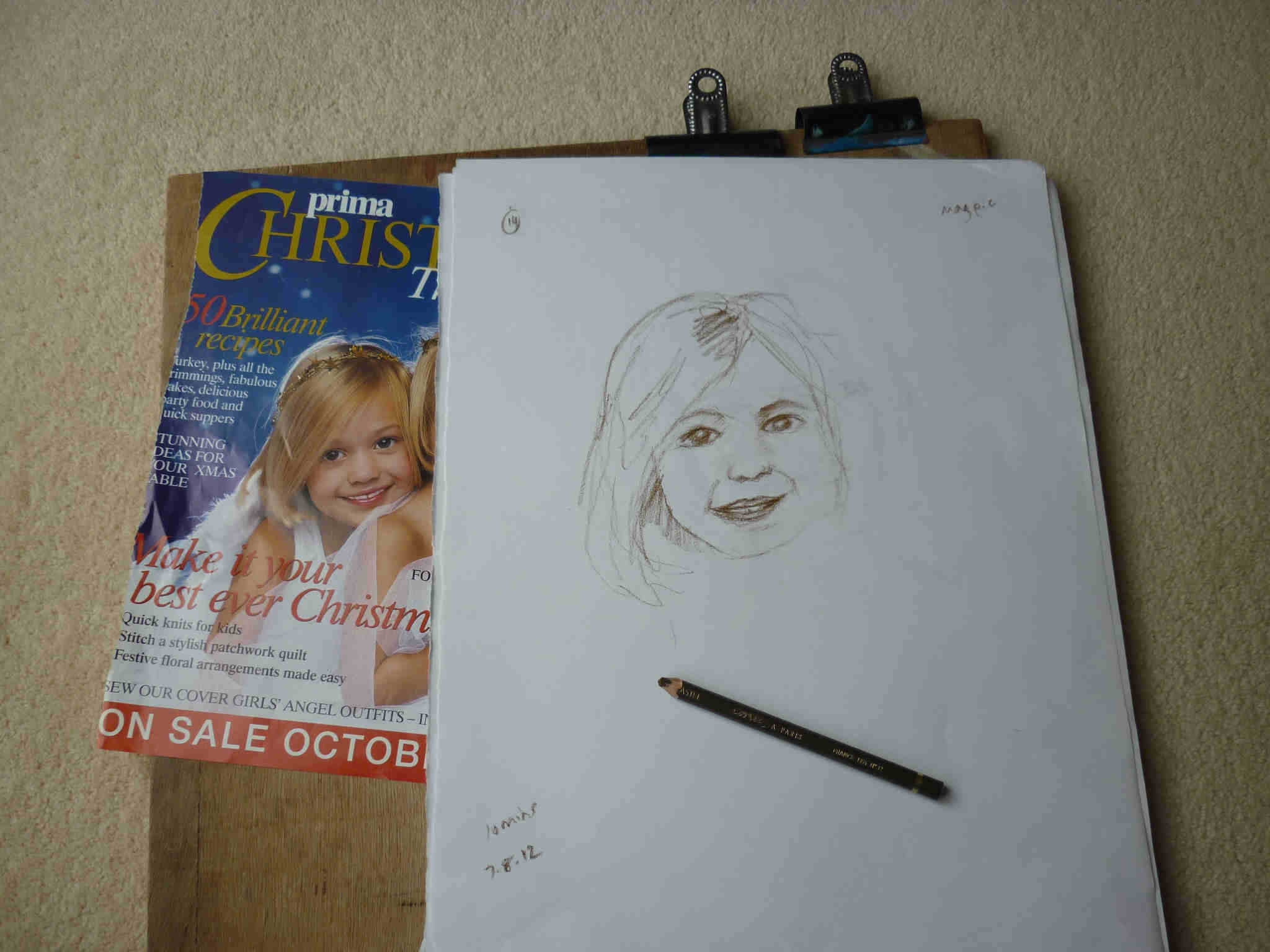 Why ten minutes can be too much

When you look at a face what do you see? You notice the eyes, the mouth, the nose, in that order, then the lesser features like the chin, cheek, hair, forehead, and all of that makes up the face. And each face is so individual, even though they all have the same features, noses can be large or small, mouths can have large lips, or thin, the subtleties and vagaries of faces is immense, and that’s before you start thinking about different skin colours or ethnic variances.

And of courseÂ age affects all of it as well, making the skin looser around the chin and adding wrinkles at eyes and around the mouth.

As does lack of age. A small child has hardly any features, only little snub noses, and small mouths with tinyÂ but noticeable teeth, rounded chins and cheeks and large foreheads.

So, when I agreed the other week to do “ten minute portraits” over the course of a busy art exhibition weekend, I knew that I would have to have lots of practice drawing faces before hand, to make sure that I was ready for the job on the day. But where to you get a load of different faces from to practice on first? I know I’d have lots of funny looks if I went up to people in the street and asked if they’d got a spare ten minutes for me……. I can hear the answers now before the police move me on for loitering with intent “Yes, love, if you’ve got the inclination, I’ve got the time!” 🙂

So that’s why I’ve spent the last few days practicing drawing faces from magazines, taping each photo to a board infront of me, and capturing the image in ten minutes. And boy doe

s that make you think quickly! But that’s the time I’ve got to do it in. Ten minutes. And you know what, I noticed that I was doing it in five. Which means that I had quickly ascertained what was important and how to capture it in the pencil. But, it still needs to look like the person in question, it can’t just be a face, it has to be a particular face, and that’s the part I have to hone now. And I’ve noticed that its the eyes and mouth that need to be darker than the rest since its those that are the main points of a face. I’ve also found that if I leave various parts of the face out the picture is far better than if I draw absolutely all of it. Less is more.

But its also helping me to decide what medium I want to do them in. They’re drawings, of course, but need to be done with a point that is both soft, and hard. Soft for the soft edges of variances in tone, and hard for the fine detail around eyes and mouths. I haven’t fully decided yet whether it will be charcoal or conte pencil, or pastel sticks.

Its hard work, but I’m enjoying facing up to the challenge…..