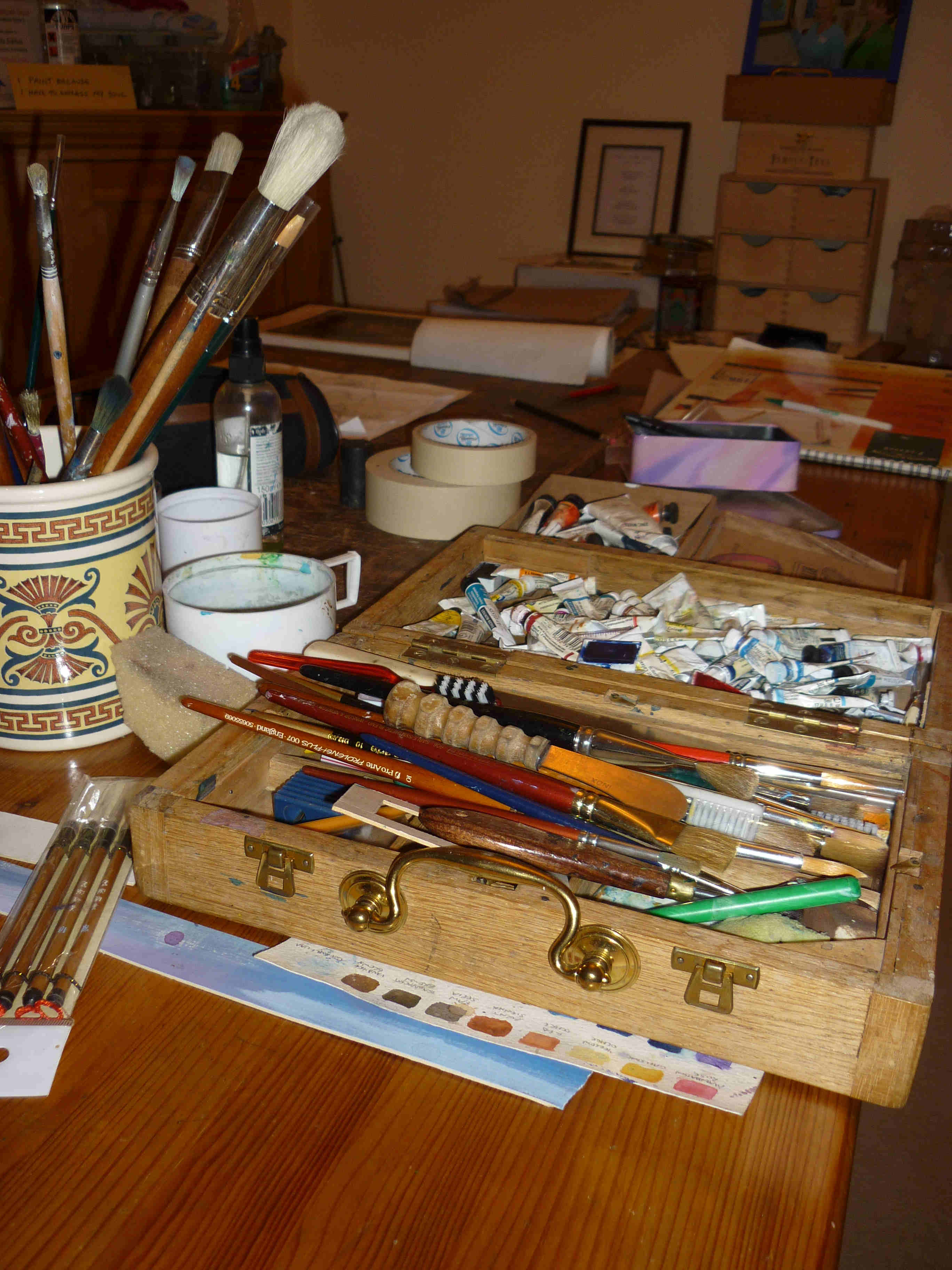 Some pictures are simple to paint, othersÂ more difficult.Â  Not difficult to paint them you understand, just more complex ideas to pull together and get right in the painting. And the one I’ve just finished for Stuart Haywood is one of them. Don’t get me wrong, I’m not complaining, not at all, infact I love it, really love it, Â when a picture makes me think, when I have to pull various things together to make a whole.

It started when I interviewed Stuart for the painting a few short weeks agoÂ – sitting down over cups of tea and finding out more about him and his background, making notes and listening to his various anecdotes. Because we’d decided between us that although this painting was of him, it was also about his life so far, what interested him,Â his passions,Â his pastimes, what had made him, a celebration of his 75 years on this earth and the impact various vocations had had on him to mould and make him the man he is today. We are all the sum of our past experiences, built onto the genes and personality we inherit from our parents. Nature and nurture. And it was that that I was interested in, and wanted to incorporate into the painting. I have full admiration for anyone wanting to pose naked for a painting, and when that person is 75 and had never done it before they met you the artist, it makes it even more special, I feel. We have certainly become friends through our connection ofÂ artist and model, and that friendship will remain, we both know that, we have a similar sense of humour, he can certainly make me laugh with his clever and witty use of the English language, usually with some cheeky naughty innuendo thrown in somewhere. To sum it up itsÂ really nature, and nurture, withÂ naked and naughty added in! 🙂

So, its been a bit of a journey for me to paint this picture for him, and it’s been one I have enjoyed immensely, even though its been a bit more involved than I had first considered.

You see, its not just about painting a picture of Stuart in the nude (him, not me) nor about putting him in a garden setting that he created (the garden he created that is, I chose the setting because it appealed so much), or about putting various things within that picture that relate to his long life – his passion and knowledge of gardening, his love of cricket, his wife of fifty years, and his love of books. Its about putting all of those things in the picture, and making the picture make sense, to a large degree. So that anyone looking at the picture, whether they know Stuart or not, will be interested in it. They make not like it, they may not fully understand it, but their interest will be piqued, they will look more deeply at it, for what it is. And that is what I have had to consider in great depth. And a large part of that is taking the various photos he had lent to me for the purpose of the painting, and drawing out the images,Â designing emerging patterns, and considering where the darks and lights, the focal point (well him, obviously!) and how the various items would sit within the picture, and relate to each other, and which would be more prominent, and which more muted.

I had worked on the picture bit by bit, over the last couple of weeks, slowly building up the things within the image, but it was really only yesterday when it all came together. Because, the painting isn’t a mixed up mess of different items, it should be a cohesive whole of all of them. And they should all work to enhance each other. That’s why its been a complex painting to pull together. Not made easier by the fact it was a watercolour which leaves no room for errors. I might have known that there were white roses within the middle of the picture, or red fuchsias, or pink roses at the back of a border, but how would they all interact with each other. And how would I show more abstract ideas such as the fact he had worked for a book-maker for many years after leaving school, and had worked with figures and money, and that he was a writer, and loved music. They were all large parts that I had to consider and put in. But as I sat and looked at the painting, tweaking bits here, adding darks there, making parts interact better, I realised that the fuchsias that I had wanted in the painting as a bright splash of red were far too prominent for what they were, and for where they were situated in the painting, and since red is the complimentary to green and most of the painting is of verdant greens,Â my eye kept going to it, wondering what that bright splash of red was that was exciting it so much. I sighed, and it was with reluctance that I toned it down, and was so pleased afterwards that I had – because the rest of the painting made sense then. Much better. This morning when I went to look at the painting afresh Â having left it the afternoon before in the dying daylight hours, I stood looking at it, and felt it virtually finished except for a couple of additions of gentle shadows. If I’d done any more to it, I would have spoilt it. It’s knowing when to stop that makes the painting. When I can find no more fault within it, and making any more changes will ruin it.

I’ll show you the picture in the next blog post, I just wanted to explain the thought processes before unveiling it to you. I always say that nine tenths of producing a picture is the thinking aspect of it, and I stand by that, particularly with this painting, which has taken me a few hours longer to do than I first thought. But I wanted it to be right for him. He had asked for a painting that I would be proud of, and I replied that I am proud of all the pictures I have painted. But, some are more special than others,Â  because more of me is in them, more thought processes, more pride for the finished painting. So, his wish has come true. At this moment I haven’t shown it to him, but he knew when I spoke to him that it would be finished imminently, so, I shall be interested to see his reaction when he sets eyes on it.Â  It’s a very personal picture for Stuart, not just because he is naked in it, because it is showing large aspects of what makes him, the man. That’s why it took me a while to find a title for it, something that was fitting and apt. I knew it was the right one, when it made me nod and smile at it in pleasure.