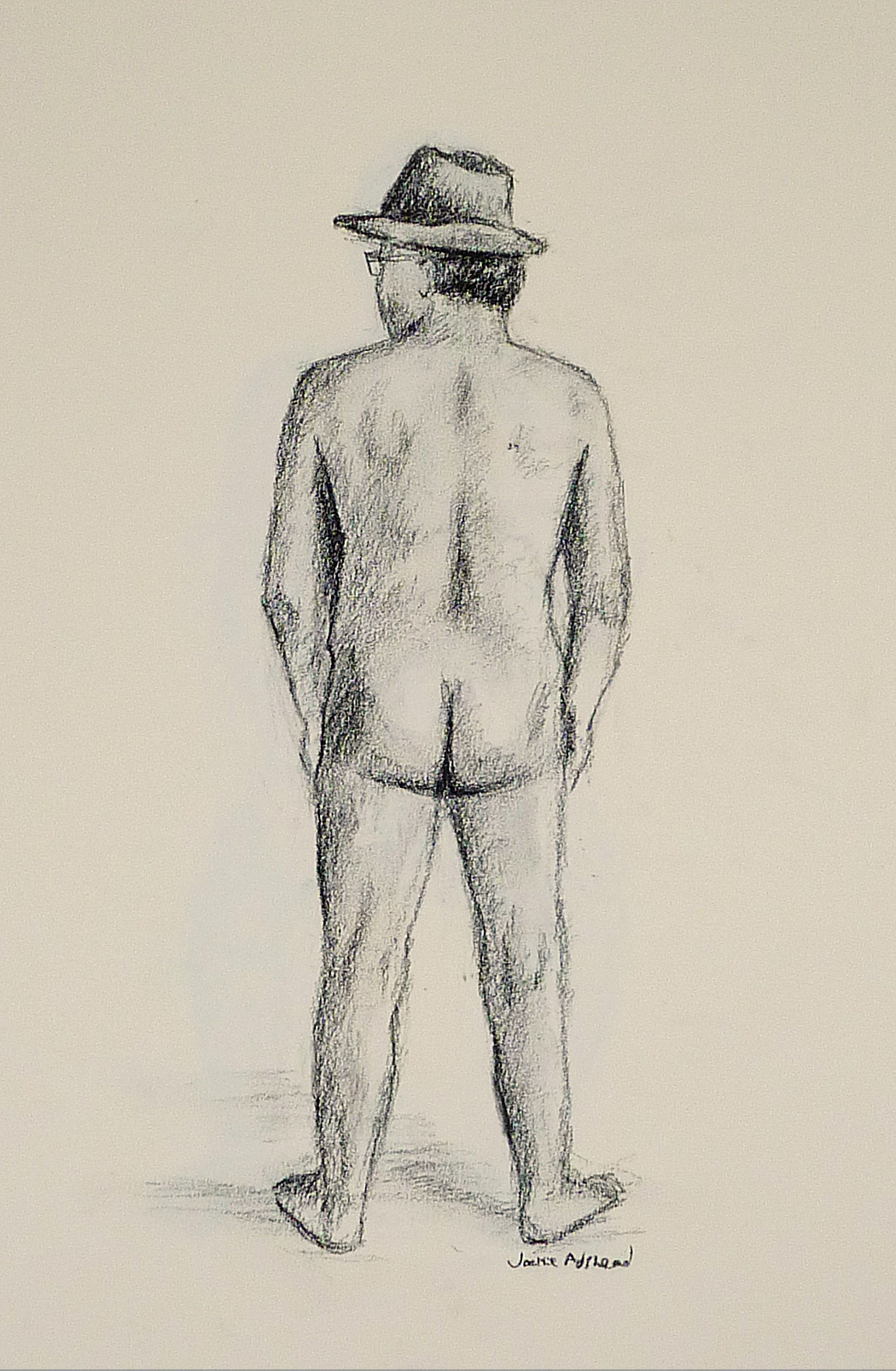 I didn’t promise you a rose garden

StuartÂ  is 75 and likes being naked around me. The fact that he’d never been naked infront of anyone other than his wife of 50 years shows the depth of trust he has in me, and the way I’ve opened up a new facet of his exuberantÂ character. Since that first day he contacted meÂ  not that many years ago, he has commissioned me to do various drawings of him, which he isÂ extremely proud of, and shows to the majority of people in his life, which I think is fabulous! We have since become friends from that very first meeting, and I love chatting on the phone with him, calling to see him and his wife, and always come away from him feeling that I’ve learnt something and with a chuckle on my lips from some amusing and usually saucy comment he’s made. So, I can say I know him quite well.

But, he wants me to know him better.

And to that end I spent three hours with him one afternoon this week, digging into the crevices. Of his life, that is. 🙂

Because what he wants me to do next is aÂ portrait, but one with a difference. Yes, it will have him in it, full body, andÂ yes he will be naked, yes he does want to be depicted with “nothing to hide” – but its more than that, and it was that I needed to talk to him about. I had this as the vague idea for a painting, and after he first mooted it a few weeks ago have been thinking about it, and have encouraged him to do the same. Because the thing that strikes me, more than anything else, is the reason WHY someone at the grand old age of 75 should WANT to do that. And the reasons behind it. Yes, I could paint a picture of him, in the nude, with some modest background and say “Here you are then, he’s your picture” but it wouldn’t show all of him. It would show the flesh of him, the physical form, but not the brain, the mind, the heart, the soul, the reason for being. None of that would be on show. And to me, that was equal to the image of him, by a long way! And that was what I wanted to know more about. I knew some of it, through talking with people you know where they come from, what sort of work they’ve done, what amuses them, what they hate, what motivates them, what their hobbies are. But you don’t know it all. And I needed to know more of it.

So, I set off, with notebook in hand to interview him. To fill in the gaps.

He greeted me with his usual cheery demeanor, and ushered me in out of the cold and wet day. We settled ourselves down in comfy chairs whilst his wife made tea and produced cake then left us to our chat.

He showed me some photos he’d unearthed, an eclectic mix, and I started asking him questions. What job had he done when he’d left school? How long had that lasted? What was his next job? Looking back over his life which was his favourite job? And although I knew some of the answers, it was really useful for me to put it all in chronological order, and order of importance to how many years he’s spent doing each job. And what he’d done when he retired, because that’s of equal use to me.

And as the conversation flowed, as we drank our tea, and had another one, the image came to me. Quite clearly.

He should be depicted in the garden he designed, and loved, at the house he lived in for the last 25 years (Because he adores gardening, and worked as a volunteer with the National Trust at Calke Abbey in Southern Derbyshire forÂ many years after he retired).

Within that garden should be various roses (Because he is an expert on roses, knows all their latin names, and has grown many splendid specimens from cuttings).

Also depicted should be his wife’s favourite rose, to represent her (Since he has spent over 50 years with her, but she doesn’t want to be in the picture as herself).

As well as that will be a green apple to represent the greengrocery shop he ran for a few years.

There will be books to represent the knowledge at his feet, since he is a very knowledgeable man on many subjects.

There will be a pen, to represent his recent writingÂ for a couple of Â local newspapers.

There will be his dog, a favoured and much loved pet.

There will be a cricket bat, or ball, or stumps, or all three, to represent his love of the game.

There will be fractions, which will probably be hidden amongst the foliage around him, to signify his many years working for a book-maker. He still totally baffles me with his fast quoting of fractions to work out betting odds, his mind quicker than any computer I could use to make the same calculations!

There will also be music represented, since he loves music, mostly classical, but of vast importance to him.

Â There has got to be some humour in there too, since he loves sauciness, in a jovial sort of way, the cleverness of English words and their subtle meanings creating mirth for him. But, I’m leaving that part to him, I think the joke has to be written, a one-liner maybe, but he’ll think of something regarding that one, he always does!

And there will be a circle with the name “Adshead” in it. Since that shows the connection with the name Adshead at the start and towards the later years – that being the name of the bookmaker he worked for for many years, and also me, who has had a large impact on him, giving him the chance to find a new side to himself in his 70’s.

Â That’s the idea, in a nut-shell.Â  And that is what I shall base my working drawings on. We may decide to change various aspects of it, or add some more in, and he has found more photos of that garden which will help me to fill the picture with colourful flora.

Â So, I’m delighted with that as a concept. His life, at 75, and all the things that have made him “HIM”.Â  If we are the sum total of our life experiences so far, this painting, will show that.

He has requested that it’s a picture that I should be proud of. And I replied with a smile that I was proud of all the pictures I’ve ever done! But, I know what he means, because this one is special for him. And I want him, and anyone else looking at it, to see that specialness.

He’s left it to me as to whether its in watercolours, acrylics, or oils. There are benefits of all of them, and I haven’t fully decided on that decision yet.Â  Either way, it’s going to be fascinating!