Further to my posting “Dare to bare – pussy wanted” on 17th August I’m delighted at the response that (so far) six ladies have volunteered to keep their faces (and to an extent, their identities) hidden but their fannies on show – well, technically, its six but the last one has been volunteered by someone else and they have suggested I send her an email to ask for her details. Now that was an interesting email to send as she isn’t a blogger I know as well as the others, only as someone on the peripheries of other people’s blogs……. so the wording had to be……..er………..tactful! Something along the lines of “Hello, you don’t know me, but your mate has volunteered you to pose intimately for me, so if you’re willing, can you send me some close-up photos of your fanny?” …… and since I’ve sent the email I’ve not heard anything, so she’s either cowering in a dark corner petrified at the thought, or laughing her head off and trying to work out HOW to take the photos. Cos it’s not easy, at all. I’ve already had some photos sent to me, and had to direct the angle/lighting/focus and composition by email and words. It would be far easier to take the photos myself since I know exactly what I want, to be able to work from, to produce some detailed paintings, but of course that’s not possible to do. The one thing that all the ladies concerned have expressed is the difficultly in getting the photos taken. And I’m sure all the guys out there would jump at the chance to take the photos for them………!

But………… when I get my collection of photos together I will be able to start painting, and since this little………….er…………….exhibition…. was mooted, I’ve had chance to talk to the volunteers and think about what they want and what I want to express in my painting. I did a practice drawing the other week and wasn’t at all happy with the outcome. I ended up with something that could be taken as a gynecological technical drawing, or in certain lights, maybe a botanical drawing of a rare and exotic orchid. And that isn’t what this is about, not for me. Its a celebration of womanhood, an affirmation of the beauty and desirability of females. And because of that, the images should be bright, with strong shapes, and very colourful, probably slightly abstract or maybe a touch surreal, as I fancy introducing the hint of a naked woman amongst the folds, and think that that as an idea will work well. I want to use bright pinks, reds, oranges and golds, and maybe purples, blues and blacks for the hidden depths. I want the paintings to be hung on a wall for people to see, and think they’re looking at some abstract design until they realise with gut-wrenching shock that they’re actually looking at close-ups of womanhood – open, and on view, for all the world to see, and admire, like some erotic flower. 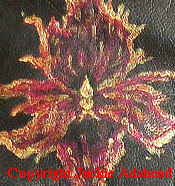