Indigo wrote a very evocative poem on her blog recently about a mistress/slave relationship and I commented that she had written strong words describing a powerful feminine relationship. Cherrie said it would be a challenge to illustrate it, I agreed it would, but went on to say it was within my capabilities to do so. Indigo latched on to my response and asked me do it, and to back her up, Lady in Red also expressed an interest in my interpretation……. so………. after due deliberation…… here is my drawing! 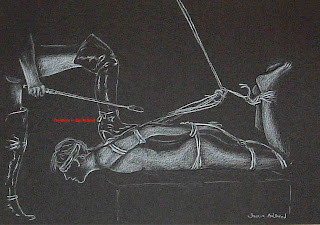 I decided that to illustrate it I would use my favourite white on black as I think it makes any image immediately more powerful, and using rope for the bondage scene meant that the white of the rope gave lovely diagonal lines leading into the drawing as well as a strong contrast against the black background. The low-lit bodies gave more interesting contours for the drawing than if the light had been from above, especially as the female figures are viewed sideways on, which could have easily made the image flat and boring to look at. But to depict the position and predicament of the slave the figures had to be viewed from the side or else the interaction between the two women would have been lost. The figure of the mistress obviously had to be shown to be dominant, and viewed from the slaves lower point of view, so I’ve shown only the high heeled thigh high boots towering up, and her clenched fist holding a riding crop menacingly over the body of the slave. The picture is definitely enhanced by the use of the riding crop leading into the picture towards the slave, underlining that the crop is a tool of correction, and again highlighting the dominant role. As is the use of the sexy black thigh length pvc padlocked boots – immediately dressing the mistress in dominant footwear and underlying her power as she purposely places her spiked heeled boot inbetween the shoulder blades of her blindfolded female slave. The pvc of the boots catches the light beautifully too and adds to the interest of the black and white image. I love the use of diagonals in this drawing, it pulls the whole scene together, the boots leading the eye to the mistress’s crutch, then down her arm to the riding crop and along the slaves body in the hog tie to the ropes reaching up out of sight, above her. I’ve called the picture “Under foot” as the submissive slave is – quite obviously!!!