Before meeting up with hornymaleuk again to draw him with my female model, I only had half-formed ideas in my head for poses for them, even though I had spent a lot of in-depth time beforehand considering it. I knew I couldn’t formalise the ideas until I had seen the inter-reaction of the two of them together. They hadn’t met before this occasion and knew virtually nothing about each other, except of their existence! And I wasn’t fully sure how they would like each other as personalities. So when they met, there was probably an element of surprise for the two of them and, to enable them to get to know each other, I suggested a relaxing drink and a bit of a chat first, so they could get some social interaction before I threw them together in some compromising poses! Whilst I stood and watched how they chatted with each other, suddenly the ideas for poses came to me and I suggested the first one to them with a little trepidation……… as it involved her on her knees in front of him, whilst he sat in front of her, holding her head as she bent her head and focused on his groin area! They agreed they were both happy with that pose (Well, I knew HE would be, before I asked him!!!), so we listened to some loud pulsating rock music, as I set about drawing them……

I’d decided beforehand to use inktense crayons as I love the way I can use them as a proper crayon, therefore having the ability to draw with a sharp point, but when a wet paintbrush is painted over the top, the pigment immediately becomes like ink and gives instant coverage with enough tonal value to create a very fine light wash right up to intense depth of dark colour, which I find ideal for this sort of quick drawing.
The first drawing went well, which I was pleased about, as first drawings don’t always do that, as it normally takes time to warm up and for me to get the right mind-set for 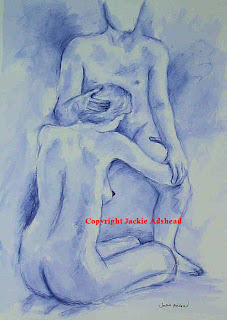 figure drawing. I decided to use just one colour for this drawing, opting for a purple, as it gave me enough depth of tone needed for the image. I particularly wanted to see the lovely rounded shape of the female waist flowing down to her buttocks, the line of her back, and her right breast and nipple in profile, her right arm reaching around to lie on hornymleuk’s left thigh, his left hand resting on the back of her arm, whilst his right hand rested on the back of her head, drawing her towards his groin as he watched the object of her desire and her facial expression. It was an easy pose for him to hold as an initial starter, as he’s a novice to this, and I was delighted with the result which I’ve entitled “Getting acquainted” and that lead me on to the idea for the next pose…….
They were both happy to go for another pose, so this time it was the woman’s turn for some attention…. This situation featured her lying on her back with her head thrown back in rapture, as he kneels below her, his face leaning in between her open legs, as her left leg is nonchalantly resting on his right shoulder. His head his hidden behind her thigh, as his hands 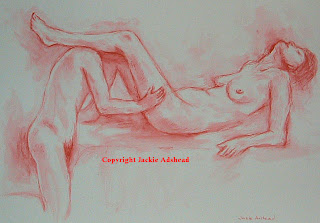 grip on her upper thigh. Since this was more of a feminine pose, I decided to use a scarlet colour and again I got enough depth of tone from the inks to give me enough detail. The female model loved this pose and kept grinning at me, as I drew her. She was getting her own back from the first pose I put her in!!! This image I’ve entitled “Rapture”!
Again, I was delighted with the second image I produced, and was on a roll so suggested a third pose for them! They agreed to go again, but requested a short break first, so of course I agreed, and after that, we set up the third pose, more restful than the first two – the woman lying in the man’s arms, her back to his chest, her legs open to the viewer, his arms pro 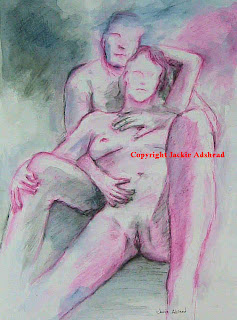 tectively around her, her right arm resting on his thigh, her left arm reaching back to caress his neck. The image of two lovers at ease with each other, complete and replete. I used three colours for this image – black, blue and magenta – as I wanted to utilise a masculine colour and a feminine one, and to pull the diverse colours together, as the couple cuddle entwined together, the colours merging where their body’s touch. I was reasonably happy with this picture but needed to do more work on it afterwards to get the right depth of colour for me to be happier with the picture. I’ve called it “Lover of mine”. I know its not fully finished, but doing three drawings within a shortish space of time, was quite an achievement! I tend to consider my drawings an “idea” and try to capture the sentiment behind the idea as quickly as possible, being fully aware that were I to tackle the image as a full painting, an awful lot more time and detail would be utilized to give a far better working image. And before you start peering too closely at the man’s visage, the features are hazy and are not hornymaleuk’s, but a generic male face, to add interest to the picture.
So, a very successful first session with hornymaleuk and the female model together. They’ve both told me they’re keen to do it again, so I hope that we can arrange that at some future point. I wasn’t sure if he would enjoy the experience of posing, as I know it can be hard work, but he kept the poses beautifully as I drew the two of them, so he seems to be a natural!!
And as a post script to this tale, I must admit to a frisson of wicked amusement, and a huge inward grin, during the evening, to listen to the pair of them chatting with each other as I drew them in compromising positions, especially whilst he had his head between her open legs as she told him rude jokes………….!